10 Things You Need To Know About AJR 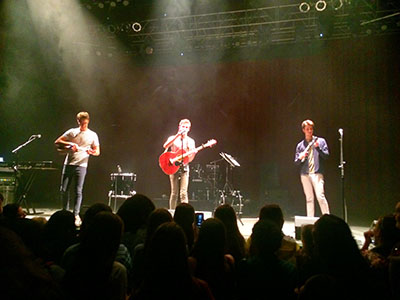 AJR performed at the Filmore Silver Spring on Oct. 24.

AJR is an indie – based pop band consisting of brothers Adam, Ryan and Jack Met. The brothers have been performing ever since they were young but just recently started to shine this past March when Warner Bros. Records signed them.

Here’s 10 Things You Need To Know About AJR:

1. All of AJR’s music is written, recorded, mixed and produced by the brothers in their living room.

2. A well known artist by the name of Sia discovered them on Twitter.

4. They were named Clear Channel’s “Artist on the Rise” for the month of October 2013. By 2014, the band was named IHeartRadio’s Artist of the Month.

5. They got their start performing in places like Central Park and Washington Square Park in New York.

6. Their single “I’m Ready” samples a song from Spongebob Squarepants.

8.  Some of their major influences include The Beach Boys, Simon and Garfunkel, Imagine Dragons and even Kanye West.

9. Adam has a degree in philosophy and business.