Spider-Man: Into the Spiderverse: A refreshing take on the classic superhero 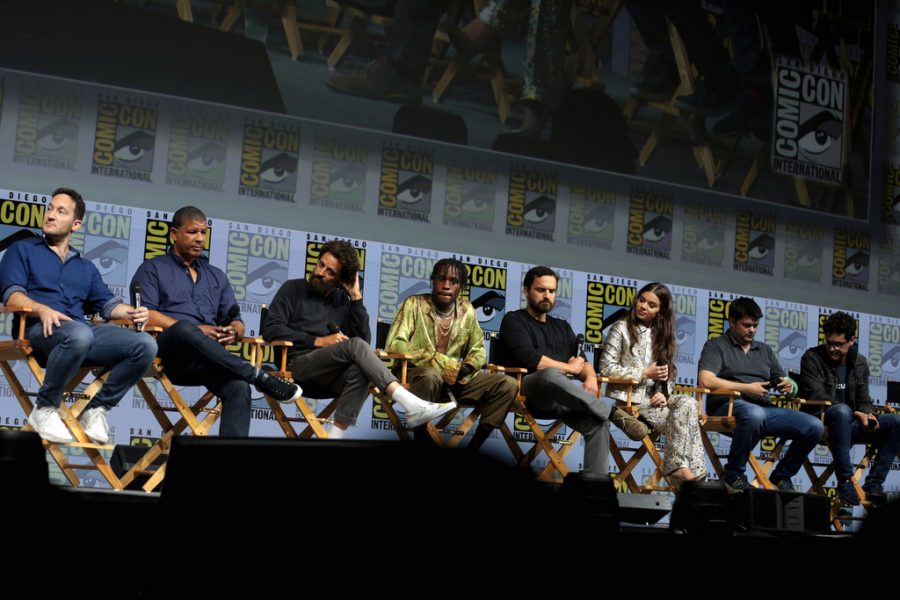 The main cast of Spider-Man: Into the Spiderverse along with its directors and screenwriters speaking at the 2018 San Diego Comic Con International. Plans for the film were revealed as early as 2014, with its casting being released in late 2018.

Within the past two decades, the Spider-Man brand had become muddled through two failed movie franchises: the Sam Raimi trilogy and Sony’s two The Amazing Spider-Man films, creating a feeling of discontent and uncertainty among fans regarding the character’s future in the movie industry. However, when Tom Holland delivered a fantastic portrayal of Peter Parker in the character’s first foray into the Marvel Cinematic Universe in Captain America: Civil War, many fans saw that not only could the character once again work in a superhero film, but also how he could function as a part of an entire mega-franchise of superheroes. Holland’s Spider-Man saw even greater success and acclaim in Spider-Man’s first solo movie in the MCU, Spider-Man: Homecoming, as well as in the greatly anticipated Avengers: Infinity War.

With Spider-Man: Into the Spiderverse’s first teaser being shown in late 2017, many were expecting it to achieve the same level of success that Homecoming did during its summer release. Additionally, fans’ excitement steadily rose over Miles Morales, the first major character, a minority no less, who would take up the mantle of the era-defining superhero in the movie.

It comes as no surprise that the film has skyrocketed past expectations, grossing $275.5 million in the box office against its production budget of $90 million. Armed with a team of 142 animators, the largest Sony Picture Imageworks has used yet, Sony and Marvel have caught lightning in a bottle and have created a spectacular Spider-Man film that seems to trump all that have come before it.

First and foremost, Spiderverse is a film for the loyal fans. This isn’t to say that the movie won’t be enjoyable for the uninitiated, but a basic understanding of who Spider-Man is will greatly enhance the experience. Knowing who the characters are, such as Miles Morales, Peter Parker and Gwen Stacy, will help the viewer truly understand the development the characters undergo throughout the movie.

The first notable quality about the film is its sound. With a score consisting of 41 tracks composed by musician Daniel Pemberton, it seems not a moment in the film goes by without music accompanying it. This isn’t even considering the soundtrack album of the film which numbers at 13 songs, reaching fifth place on the US Billboard 200 chart.

One of Spider-Man: Into the Spiderverse’s greatest strengths is its visuals. By not being a live-action adaptation, the movie is able to display the jaw-dropping fluidity of Spider-Man in motion without being limited by CGI costs and the restrictions that come with working with an actor. The overall aesthetic of the film feels like you’ve stepped into a comic book – with various techniques such as line work and dotting being used whilst omitting motion blur and instead replacing it with animation principles like squashing and stretching to make every frame look like a comic book panel. Action scenes are even accompanied by written onomatopoeias, contributing to the overall feel of the movie.

Not only are the physical attributes of Spider-Man’s actions captured perfectly in the movie, but the overall feel of Brooklyn, New York, where the majority of the film takes place, is as well. The setting feels cluttered, with Miles having to webswing through crowded and bustling streets, hollering both whoops and apologies the whole time as he tries to get a grasp of his powers. Springing off of busses and leaping over speeding taxis grounds this 3D animated superhero film in a realistic setting, despite it dealing with sci-fi elements such as alternate dimensions and super-colliders.

At its core, Spider-Man: Into the Spiderverse is a story about a young kid determined to do the right thing, while still trying to balance out his own life at the same time. Because of this, perhaps its greatest strength is how it draws back to the origin of Spider-Man as both a character and an idea. When Stan Lee created the character all the way back in 1962, he wanted him to be a character that the average person could relate to. As a result, Spider-Man eventually became the embodiment of the relatable superhero as well as the personification of the idea that “with great power, comes great responsibility”. Spider-Man has long since evolved from being just a children’s comic book hero to being widely recognized as representing an ideal for young fans to aspire to emulate.

Spiderverse does all of this in a refreshing take. Miles, unlike Peter, does not come from tragedy. The struggles he faces now compared to his mentor are far more relatable to the teenage audience. He faces adversity not through dealing with abusive employers and dead uncles, but with heavy loads of school work and relationship management. Despite only being a freshman in high school, he has both an awe-inspiring sense of responsibility and a seemingly-bottomless well of courage that can’t help but make you wish you had even a tenth of his qualities.

The beauty of Spiderverse comes not from how it reinvents the wheel of the modern-superhero movie genre, but instead comes from how it gives it a different spin. This film shows that you don’t need household Hollywood stars and a massive budget to create an amazing comic book movie. Not to say that actors such as RDJ and Chris Evans don’t try to put effort and love into their roles, but it goes to show that all you need is a good message, talented voice actors and a team of passionate people to create one of the greatest superhero films ever made. While it remains to be seen, expect more animated superhero films to come out within the next decade in an attempt to recreate what Marvel and Sony have done with Spider-Man: Into the Spiderverse.