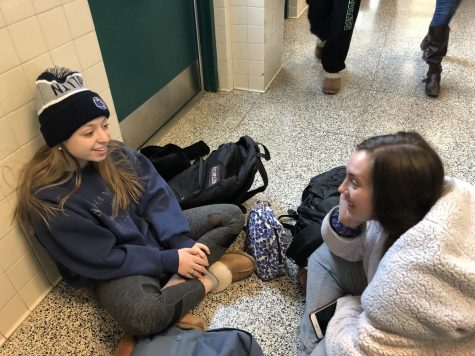 Seniors Debra Eller and Jordan Berkman discuss the newest episode of The Bachelor.

On January 7, the 23rd season of The Bachelor began, and let’s just say I’m not disappointed.

This year’s bachelor is cutie Colton Underwood, who was the runner up in Becca’s season of The Bachelorette and starred in Bachelors in Paradise. Underwood is a former NFL player who is just trying to find a short-lived love with a boring, blonde 21- year-old.

This season is surrounded by Underwood’s virginity. I personally believe the producers of the show chose Underwood solely on the basis that he is a virgin – thinking it would make for an interesting season. However, it has resulted with every girl asking Underwood why he is a virgin, then a 10 minute explanation followed, and I’m very sick of hearing it.

There started with some girls who looked like they were going to be crazy, like the fake Australian girl, but I don’t know what happened to that plot line because she dropped the accent after the first episode, and Underwood never questioned it. I am confused how Underwood didn’t think that was odd and a little bit insane. It turned out that the girl was normal and went home after the first couple of episodes. The next girl who we thought would be good entertainment was Onyeka. She banged pots and pans at girls to get Colton’s attention and she called a girl a liar to her face. Although she had her moments of insanity, she was pretty much normal. Therefore, this season hasn’t had enough crazy for my taste.

The funny girl of the season is named Demi, who, spoiler alert, got kicked off the show. I am very sad to see her leave, because without her all the girls have no personality. The dramatic one this season is Underwood. Yes, Underwood is a huge drama queen. After every minor inconvenience, he gives up on the conversation and just walks away with no explanation, saying things like “I can’t do this anymore.”

Underwood has been the most rejected bachelor so far – already two girls have told him they just aren’t that into him and have decided to go home. I respect them for telling him their true feelings, but they walked out of Singapore, and Thailand. I would’ve stayed for the free vacation.

One of the dumbest plot lines of this season is that there is a girl named Heather who apparently has never kissed anyone before. This I don’t believe in the slightest because she is 23 years old, beautiful, and dated her last boyfriend for eight months. Also, when she had her “first ever kiss”, with Underwood, she was way too good at it.

If you haven’t started this season, you probably should, because Underwood is the most dramatic bachelor ABC has ever had. He makes out with every girl in front of other girls, which is disgusting, but also entertaining. I am very excited to see who he picks as his wife. I am even more excited to see if I win the bet with myself of when him and his fiance will break up (I think they’ll be over by May).