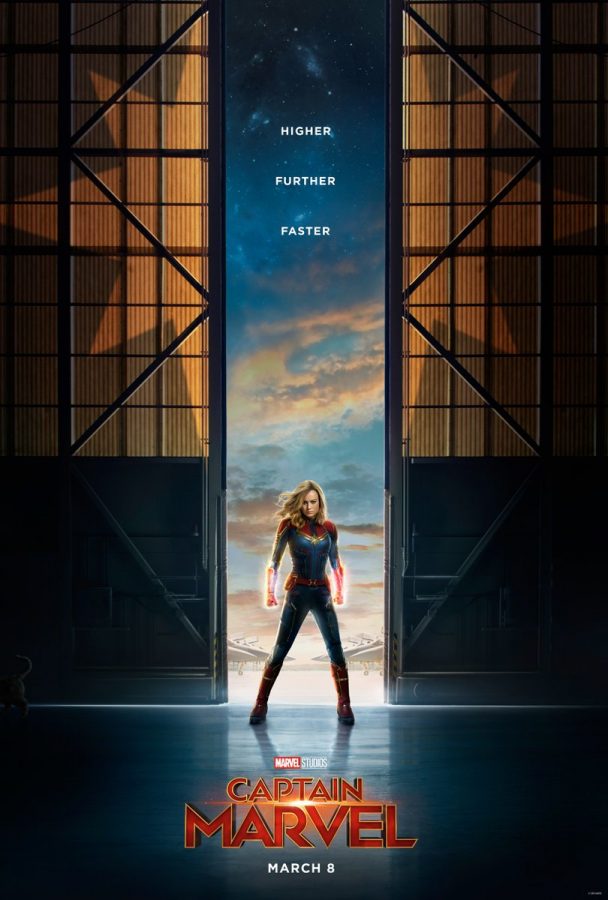 Marvel Studios’ first female superhero movie, Captain Marvel, in spite of the prior controversy surrounding it, has stood strong in the face of adversity (like its titular-character) and exploded in the box office. Opening at $500 million worldwide, the film has become the highest ever grossing movie with a female lead, eclipsing even DC’s Wonder Woman, which opened at just a fifth of Captain Marvel. Led by Academy Award winners Brie Larson and Samuel L. Jackson, the film accomplishes its role of being both a statement on female empowerment as well as an entertaining superhero film.

The first thing to note about the movie is the message it sends. Much like Wonder Woman, a central theme of the film is about female empowerment. From a young age to her years training as an Air Force pilot, Captain Marvel (Carol Danvers) has stood in the face of adversity from her male peers and persevered, accomplishing her goals along the way. However, unlike its DC counterpart, Captain Marvel is a bit more on the nose in terms of its message, and at times, can slightly disrupt the story and dialogue with it. This isn’t to say that it derails the film entirely, just that it feels out of place with how blatant it is at some points in the movie.

Captain Marvel fits in with the rest of the Marvel Cinematic Universe (MCU) as well as its fellow space-faring franchise, Guardians of the Galaxy. Expanding on the universe that Guardians 1, 2 and 3’s director James Gunn created, the alien races known as the Kree, who were introduced in the first Guardians movie, and the Skrulls, who are long-time antagonists in the comics, are explored and developed in the movie. At the outset of the film, the Kree are shown to be stalwart defenders of the universe, curbing the infestation of the Skrulls; shapeshifters who are seemingly bent on galactic domination. Long time Marvel Comics fans will recognize this relationship between the two as soon as it’s introduced, but Captain Marvel soon throws that entire dynamic out the window with a surprising twist.

With the film taking place at the cusp of the 21st century in 1995, Captain Marvel serves as a prequel for most of the MCU, setting up the creation of the Avengers and some of the events in Guardians of the Galaxy. Due to its placement in the timeline, the film’s soundtrack is filled with iconic music from the 90s, and while it isn’t as well placed as in Guardians of the Galaxy, it sets the tone of the film well.

Larson does a fantastic job adapting Danver’s personality to the big screen. Brimming with self-assurance almost to the point of overconfidence along with a snarky and mischievous sense of humor to match, Larson often commands the scene when present. Contrary to what the controversial trailers showed, Danvers is in fact not a soulless robot, but a passionate soldier with a strong sense of justice.

Jackson and the rest of the cast, consisting of names such as Jude Law, Ben Mendehlson and Lee Pace do a great job as well. The dynamic of Danvers and Fury in the film is comparable to that of a buddy cop film, and the chemistry between Jackson and Larson is made progressively more apparent throughout their interactions in the movie. This Fury, unlike the one seen in previous Marvel films, is far less jaded and a bit more green, cracking jokes and making pop-culture references. Law does well with what he’s given, portraying the strict mentor and commander to Danvers. The writing of his character does leave much to be desired however, as with most of the supporting cast who tend to lack presence within the film. The one exception to this is the outstanding performance by Mendehlson, whose innate charm and wit create an amusing mirror to Larson’s Danvers in the form of the Skrull commander, Talos.

As with all superhero movies, the action sequences play a quintessential role, and while the first two combat scenes of the film are fairly sparse in the special effects department, being more focused on fight choreography, the final act of the film is an “army of one” visual effects spectacle. At the movie’s climax, Danvers is engaged in a massive confrontation set in Earth’s atmosphere, clashing with the forces of Pace’s Ronan, who fans will remember as the main villain of Guardians of the Galaxy.

Despite the film’s success, it is without a doubt still a flawed movie. The aforementioned, forgettable surrounding cast don’t do the movie many favors in remaining memorable, especially with Endgame coming out within a month. The movie’s pacing tends to stagnante around the second act as well, with it being primarily dedicated to building up a cast that most won’t even care to remember in a week’s time. Perhaps the movie’s greatest strength, Danvers, is also its fatal flaw.

When Danvers removes the restrictions placed on her by the Kree’s leader, the Supreme Intelligence, she becomes an unstoppable wrecking ball that faces absolutely zero opposition from both Ronan’s fleet, as well as from her former squad led by Law’s Yon-Rogg. This was most likely done in order to build up Danvers’ power for Endgame, in which president of Marvel Studios, Kevin Feige, has gone on record stating that Danvers would be the most powerful superhero Marvel has introduced. However, at the cost of making sure Danvers isn’t some deus-ex-machina that’s introduced to save the day, Captain Marvel ends up becoming simply a set-up to Endgame. For a movie that tries to boast the strength of its titular character and expand the universe of the MCU, it simply lacks the necessary opposition to prove such strength. Even before Danvers removes her inhibitions, she’s still the strongest singular force in the movie by far.

Captain Marvel is by all means a great superhero movie, and stands as being both Marvel Studios’ second highest grossing film, as well as their first foray into a female superhero-led movie. With Endgame right around the corner, being set up as the conclusion to the current iteration of the MCU that started with John Favreau’s Iron Man, it’s almost a certainty that Brie Larson and Carol Danvers are here to stay.