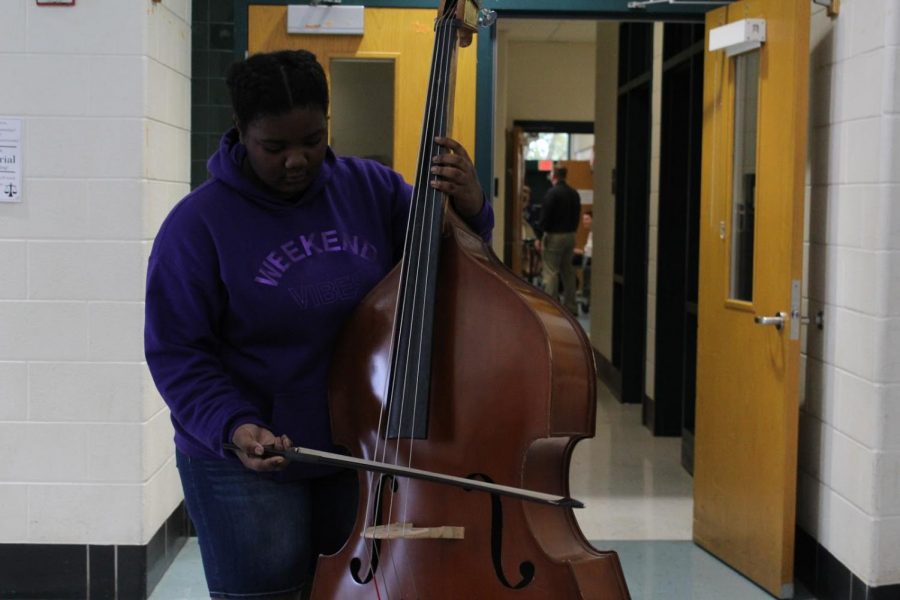 Semira Hill playing a bass outside the band practice room. Hill can play over half a dozen instruments ranging from the drums to the violin, and she is also a part of Madrigals, the highest level choir class WJ offers.

Walk into a music classroom and you’ll find so many students with amazing voices. Students at WJ come with all sorts of different talents, but there is one particular student who plays over 10 instruments and can sing in both a male and female voice. That student is junior Semira Hill.

Hill has been playing instruments since the third grade starting with the violin. Her interest in music was sparked at a young age by encouragement from her mom.

“I got interested in music because I remembered my mom used to sing when she was younger and I wanted to try it out,” Hill said.

The more Hill learned to play an instrument, the more she wanted to learn to play. After she learned one instrument, she’d grab a new instrument and learn to play it. She plays the piano, cello, bass, drums, tuba and more.

“Learning to play one instrument and then learning to play another is like the same language but a different style,” WJ music teacher Kelly Butler said.

As Hill has continued to learn and play instruments, her love for singing has also grown. Hill sees herself continuing on this path in the future and into her adult life.

“I’m looking at places like Berklee [College of Music], Shenandoah [University] and even UMBC for college,” Hill said.

Hill has had several opportunities to sing in professional venues, such as singing with her choir at Strathmore for the play Children of Eden with Stephen Schwartz and much more.

“I sang with my a capella group at a meeting for immigrants who are in the process of becoming citizens,” Hill said. “We also perform around the community in restaurants and stuff like that all the time.”

Hill’s mom used to sing and wanted her to try, so she did. After that, her mom encouraged her to join the choir.

Hill is always open to trying new instruments and is unfazed by any potential challenges.

“Semira is always willing to go for it and she’s not scared to try anything. She’ll just pick up a new instrument and learn how to play it,” Butler said.

WJ has helped polish Hill’s skills. Before she entered high school, she didn’t have much of an idea of what she wanted to do and wasn’t really invested inmusic.

“I wasn’t super serious about music but all the teachers in the music department have helped me improve in some way, whether it was sightreading, vibrato, or technique,” Hill said. “Music at WJ has been good for me and has acted as an escape from the bad. I’ve worked very hard to get where I am today.”

Semira Hill plays several images ranging from the piano to the cello.