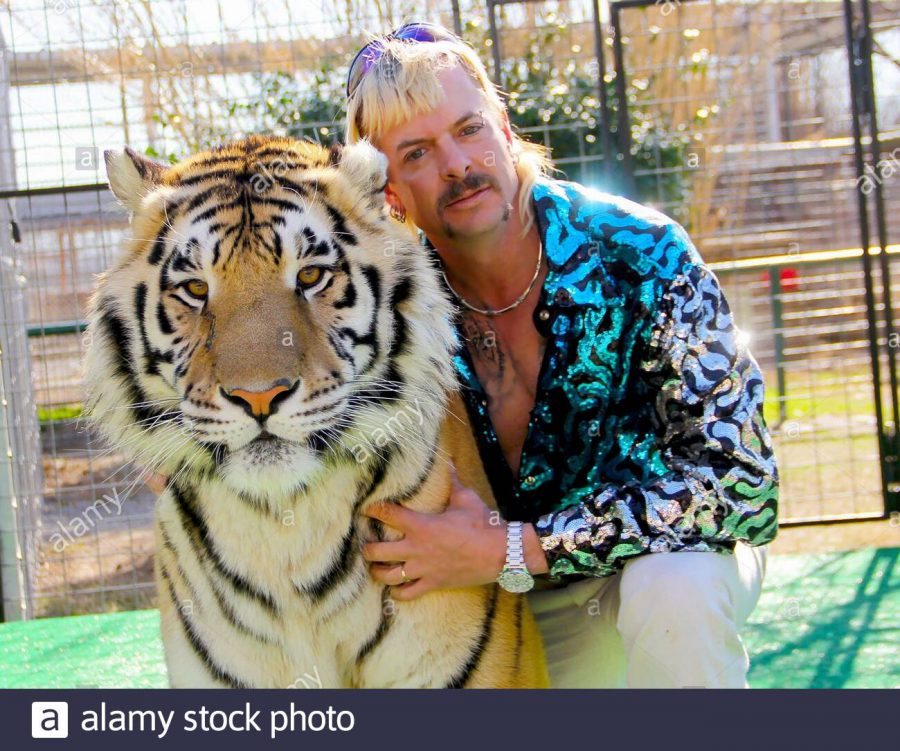 Joe Exotic, one of the stars of Netflix's Tiger King pictured with a tiger. Tiger King a popular tv show released during quarantine.

There is a general consensus that there have been different stages of quarantine, and with that comes different stages of entertainment that were consumed. There was the fever-ish denial stage, where tigers and cult-esque organizations ruled our mind. Followed by a personal favorite: a deep reality show coma to forget, for a moment, what’s happening in the real world. Then finally a documentary to remind us that actual things are happening and time hasn’t just stopped.

In a realm of its own, Netflix’s Tiger King, which released Mar. 20, was a highlight of the quarantine experience. The Netflix documentary series delved into big cat breeding, murder, suspicious cult-like groups, and other bizzare things with Carol Baskin, Joe Exotic, and other personalities. Tiger King gained immediate popularity gaining over 34 million viewers in its first 10 days, and garnered a lot of mixed reviews.

“Tiger King was an unfamiliar topic and a weird concept, but it was okay, “ junior Moses Escarment said.
Other documentaries include Ava DuVerney’s 2016 Netflix documentary 13th, a film centering around the 13th amendment, the racial inequalities in the United States and how the prison system disproportionately affects Black-Americans.

“[The documentary] was really interesting, and you learn a lot of different things. It focused on an issue that is important right now especially and still relevant even though it was made a couple of years ago, ” junior Imani Safari said.

With everything going on with the BLM matter movement, it’s important now more than ever, to educate ourselves on such issues, and 13th is an excellent way to start.

More honorable mentions in the documentary category are HBO’s McMillions (2020) which follows the McDonalds monopoly scandal , Netflix’s Athlete A (2020) about Dr. Larry Nasser”s sexual abuse of young gymnasts and Filthy Rich (2020), a docu-series about Jeffery Epstein.

Whether they’re focused on Brits being judged on their baking skills (The Great British Bake Off) currently on Netflix or a group of Europeans on an island somewhere looking for love (Love Island UK) or Netflix’s Selling Sunset (2020). A genre that somehow manages to combine real estate and drama in the best way possible, reality shows provide a satisfactory escape into someone else’s word for a change instead of the dreariness that looms over quarantine.

For shows and movies with coherent plots and story arcs, Netflix’s Hollywood (2020) is a great option.

“[Hollywood] had a really interesting plot with really good characters and I liked how it was set in the golden era of Hollywood. It also had a great representation of minorities and the LGBTQ+ community,” junior Tomison Ogunnusi said.

Other shows include HBO’s dark teen drama, Euphoria (2019)., “The Devil All the Time” (2020) a very creepy, mind-trippy mystery-thriller, Never Have I Ever (2020) a hilarious coming of age series, and The Umbrella Academy (2019); a dark superhero fantasy show.

All of these shows provide (though some better than others) quality entertainment for quarantine.