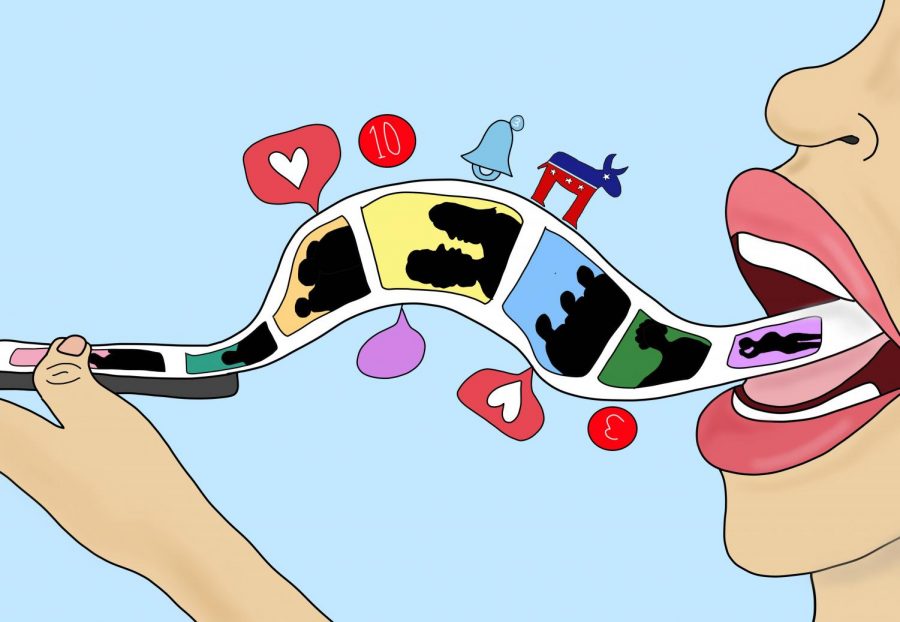 As the country—and the world—experiences a variety of unique issues like foreign election meddling, increased polarization, fake news, far-right and far-left movements and threats on the institution of democracy, the Netflix documentary The Social Dilemma reveals an implicit connection between social media and current events. In the film, several former executives and engineers join psychological experts to give insider information on the manipulation of people through social networking platforms, as well as identify ethical concerns that arise from social media and the companies that operate them. Their hope is to wake people up to demand that ethical practices be adopted by gigantic tech firms.

Tristan Harris—former design ethicist at Google and co-founder of Center for Humane Society—notes in the documentary that persuasive technology has a goal of “implanting an unconscious habit” into people to use social networking sites obsessively. He comments that the decisions of a small group of people have never had the power to affect the everyday thoughts and actions of people around the globe but that now, fifty designers in an office in California can influence the activities of billions. Because of the immense influence that companies like Google and Instagram have on the world, Harris founded the Center for Humane Society and now advocates for the development of humane and ethical practices in the tech industry.

The “Like” button was a big topic covered in the documentary. Originally, Justin Rosenstein—inventor of Google Drive and Gmail Chat—and his unit had this amazing idea to
spread positivity and make people happy through the option to “like” people’s posts. Families who lived far apart could keep in touch with relatives. People could reunite with their college friends and new connections could be made between people. The original purpose of likes was to share information, congratulate people and share what creative things they were doing. They were not meant to be used to gauge someone’s worth in society, give people FOMO (fear of missing out) or make people change their appearance to fit unrealistic beauty standards.

One of the unforeseen consequences of likes was the higher hospitalization rates for self-harm, lower self-confidence and higher suicide rates among teen girls. According to NYU social psychologist and author Dr. Jonathan Haidt, hospitalizations for self-harm have gone up 62% for older teen girls (ages 15-19) and a staggering 189% for younger tween girls (ages 10-14). Suicide rates followed a similar trend, with a 70% increase for older teen girls and a 151% increase for younger teen girls. All of this happened around 2012, coinciding with the invention of the Like button and Instagram. Humans by nature seek approval of the people around them, and never before have people been susceptible to constant criticism about their appearance.

Jeff Seibert—a former executive at Twitter—made a few statements that shocked audiences, and one about data usage got people thinking.

“Everything they are doing online is being watched, is being tracked, is being measured: every image you stop and look at, for how long you look at it,” Seibert said.

This feature is known as the “algorithm,” which helps analyze what a user likes and suggests new posts based on this information. Data scientist Cathy O’Neill makes the point that no algorithm is objective, and that it always has an agenda. For these social media companies, whose goal is to make a profit and whose business model is advertising, the algorithm becomes the vessel for that goal. Through the algorithm, the corporation can keep people scrolling for longer periods of time, allowing users to see more advertisements and therefore making the business more money. With all that data, companies have the certainty that you, the user, will continue using their app, roping family and friends into creating accounts to use the app, and making them as much money as possible.

When it’s said like that—businesses want to keep people on their app— it should create a feeling of unease. In effect, social media companies want users to be addicted to their phones because the more time and attention people devote to Facebook, Twitter, or Instagram, the more profit these institutions make. Entrepreneur, inventor of the “infinite scroll” and former Mozilla employee Aza Raskin interpreted this to mean that advertisers are the consumers and users are the product. Advertisers pay social networking sites like Instagram to publicize their brand, good, or service. Potential buyers are already handpicked by the algorithm, so users are pitched products that are perfect for them. This allows the company to make as much money as possible, and that sentiment brings up an interesting point. We think that we are the consumers because we’re the ones using social media, but really, we are the product.

Jaron Lanier—author and computer scientist—ominously states that the product is “the gradual, slight, imperceptible change in [our] own behavior and perception… That’s the only thing there is for them to make money from. Changing what you do, how you think, who you are.” Social media companies want to mold users into someone they can easily profit off of, and advertisers’ objectification and dehumanization of people is a little frightening.

Political Polarization and the Algorithm

The reason for this is the algorithm. Google and all these other companies profit off of division and increased polarization; fake news makes money. If people are presented with statistics and information that corroborate their opinions, they are more likely to continue using the service, which makes companies more money (notice a pattern?). If you like a liberal-leaning post on social media, the algorithm feeds you more posts with left-leaning ideas. The same is true for Google. If you only visit Fox News and Newsmax with your Google account, your newsfeed will be more right-leaning than someone who only reads the Wall Street Journal, and this will be more conservative than someone who exclusively reads CNN and Occupy Democrats.

We all read about people who seem stupid because their beliefs and perception of the world do not align with our opinions. We probably think something like “What? How could you be so dumb? Look at all this information I’ve seen on this topic. How could you not understand that?” The thing is that they actually haven’t seen the information because of the algorithm. By telling people what they want to hear, tech firms are reinforcing Democratic or Republican ideas in people’s heads, leading them further leftwards or rightwards on the political spectrum, and sowing continuous division in the country.

The algorithm’s impact on politics is enormous. Jaron Lanier makes a Wikipedia analogy to explain just how messed up the whole system is. If Wikipedia said, “We are going to give every person who visits Wikipedia a personalized definition of a word based on his or her political beliefs, location in the world and search history,” there would be a lot of pushback; it would distort people’s perception of reality. But that’s exactly what’s happening with all these social media companies. People on the right only see what’s presented by the right, and the people on the left only see what’s presented on the left. This misleads the public and makes it difficult for people to agree on what’s true. And as Tristan Harris points out, “If we can’t agree on what’s true, we won’t be able to solve any of our problems.”

The rise of far-right and far-left politicians in countries like Italy, Spain and Vietnam has been driven largely by Facebook and misinformation. The chaos happening in Brazil with Bolsonaro has been fueled by Facebook and accusations of hoaxes. Facebook has ignited hate crimes against the Rohingya Muslims in Myanmar, and Russia and China have been able to influence elections with the tools that Facebook provides. In the United States, racist sentiments have grown into vocal protests, and conspiracy theories threaten the fabric of our society. This fake news that is spread through the use of social media isn’t just misinformation. It has real consequences for society.

Why It’s Important to Our Lives

As teenagers in the twenty-first century, we’ve grown up without the constant influence of technology and experience our current lives through Instagram, Facebook, Google and Twitter. We make unrestrained use of the “Like” button, share our political beliefs and opinions on current events, communicate with family and friends and scroll through posts and videos for hours on end. However, not many of us are aware of how tech firms use our data or how that usage affects our lives. Senior Malhaar Nair says the film made him realize that he and the majority of his peers are addicted to their phones. He hopes to be able to gradually change his habits. “My biggest takeaway is if you truly want to improve your mental health, use your phone less,” Nair said. “It’s that simple.”