A guide to 2020 Hanukkah music 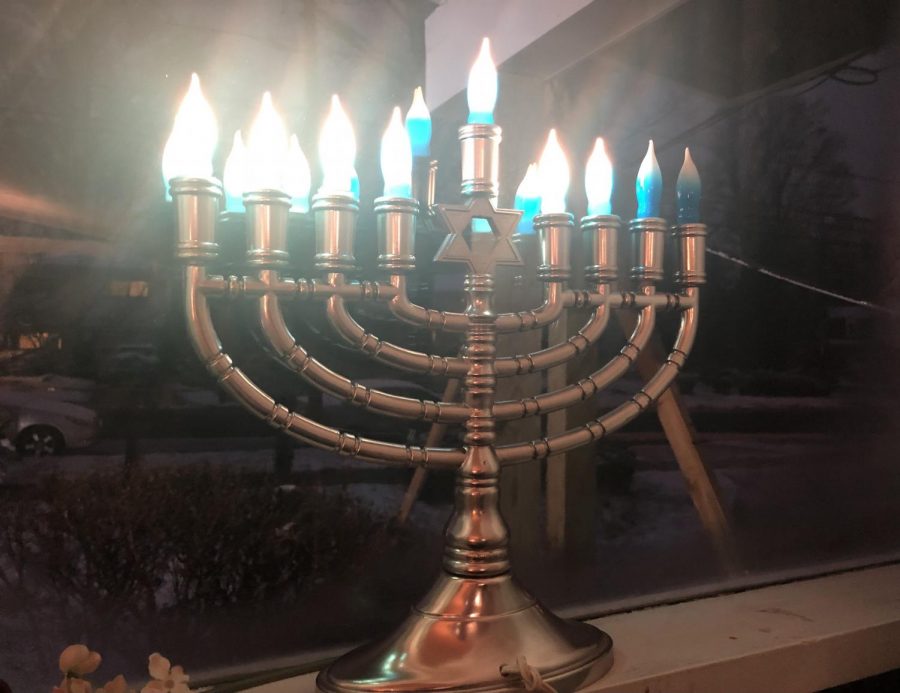 An electric Hanukkiah stands on a windowsill on the sixth night of Hanukkah. The Jewish holiday last for eight days and eight nights.

With all the Christmas excitement this time of year, it can be easy to think that other winter holidays like Hanukkah and Kwanzaa aren’t as important or fun. However, this simply isn’t true. The last day of Hanukkah this year is on December 18th, and even though the holiday has had its fair share of ups and downs, it should still be finished on a positive note. So, below is a list of some of the best Hanukkah songs out there.
The Dreidel Song
Hmm, I wonder what this one could be about. The Dreidel Song is a classic children’s song that is guaranteed to appear on every Hanukkah playlist. It’s fun and catchy, and most Jewish kids have it memorized by heart from a very early age.
S’vivon
Also a popular family piece, S’vivon is a Hebrew song that basically just repeats the same four sentences over and over again: “Dreidel spin spin spin”, “Hanukkah is a nice holiday”, “It’s a joyous holiday” and “A great miracle happened there”. S’vivon is simple, memorable and a great choice for your annual Hanukkah party.
Oh Hanukkah
This one goes with the previous two pretty well, given that it is yet another children’s song. Luckily, though, Oh Hanukkah’s lyrics are a little less basic, and make for a pretty good dance song. Oh, and it was performed on Glee by two characters while they were driving around a movie set on a golf cart. Make of that what you will.
Light One Candle
Light One Candle is one of my all-time favorite Hanukkah songs. Its melody is beautiful and the lyrics are deep and poetic. Take, for example, these lines from the first verse: “Light one candle for the pain they endured when their right to exist was denied. Light one candle for the terrible sacrifice, justice and freedom demand”. Chills.
Ma’oz Tzur
Ma’oz Tzur was originally written sometime in the 13th century as a Jewish liturgical poem. It’s a moving Hebrew piece with six stanzas that each retell a part of Jewish history. However, in recent years the first stanza is often the only one that is sung. For those wondering which version to listen to, I highly recommend Leslie Odom Jr. and Nicolette Robinson’s cover which they recently released, ironically on a Christmas album.
Puppy for Hanukkah
The Hamilton cast really is a gem. This absolute banger is by the one and only Daveed Diggs and his rap band Clipping, who has, to the vexation of Jewish parents everywhere, really raised the standards of Hanukkah gift-giving. However, the real magic behind this hit is the inclusivity of both its music video and stylization. The video, released by Disney on their Youtube channel, showcases a diverse cast of children lip syncing to the song while lighting the candles and playing with a Corgi puppy. It’s a beautiful show of the often overlooked multiculturalism of the Jewish community that is long overdue.
Chanukah Song
The only disappointing thing about this piece is its spelling of Hanukkah. Written and performed by Adam Sandler in 1994 on Saturday Night live, this novelty song was created for Jewish children who felt alienated during the Christmas season. To sympathize with their situation, Sandler spends four minutes listing off real and fictional Jewish celebrities, as well as clarifying which celebrities aren’t Jewish. O.J. Simpson and Ebenezer Scrooge don’t celebrate Hanukkah. In case you didn’t know.
Candlelight and Miracle
Of course, no Jewish list (or childhood) would be complete without the Maccabeats. While I did combine these two viral hits since the group has sung them both, it is worth noting that Miracle was originally written by American Jewish reggae singer Matisyahu, whom you may know for his other breakout piece, One Day. The Maccabeats’ music videos for both songs are family friendly and fun, and a great way to both kick-off and end Hanukkah.
No matter which Hanukkah music you choose to listen to, never forget that this holiday is no less important or valid than any other. Chag Sameach!