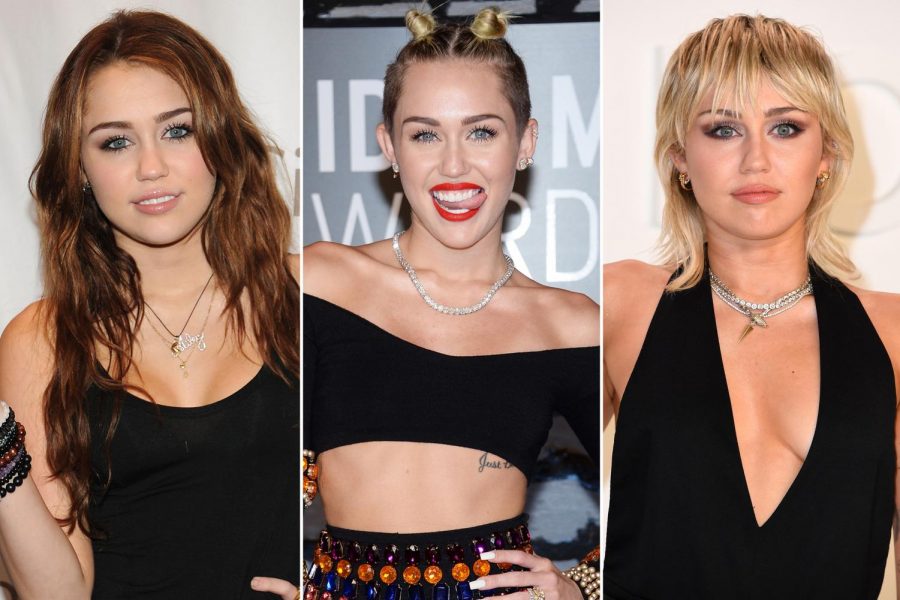 Throughout her 14-year career, Miley Cyrus's image has changed many times, from her hair and makeup to her music and coverage by the press.

As Gen Z-ers, we’ve all grown up in Miley Cyrus’s world.  I personally owned an acoustic Hannah Montana guitar (the strings for which my sister tragically cut in half) and an iPod-type toy that played three of her best songs.

Since she landed the lead role on “Hannah Montana” in 2006, Cyrus has risen and fallen from grace with several movies, a coaching stint on “The Voice” and seven studio albums.  In celebration of her songs reaching Tik Tok popularity, let’s look at the high and low points of Miley Cyrus’s career.

Cyrus starred in a Disney sitcom in 2006 to begin her career.  She played a high school girl, Miley Stewart, who lives a double life: a regular student by day and a rockstar, Hannah Montana, by night.  Miley rapidly became a teen idol, and she released two albums under the character’s name.

In 2007, Miley Cyrus released her debut single after signing with Hollywood Records.  “See You Again” peaked at number 10 on the Billboard Hot 100 Chart, and she soon dropped her first studio album.  The following year, her second album, Breakout, hit the top spot on the Billboard charts.

2009 saw the release of Hannah Montana: The Movie, and its soundtrack became one of the most notable albums of her career.  “The Climb,” won Best Song From a Movie at the MTV Movie Awards.  Miley also acted in the movie The Last Song with Liam Hemsworth, and the two began dating on and off.  With her third album in 2010, she tried to distance herself from Disney.

As Miley Cyrus began changing her image—she donated to the Red Cross in 2011 after the earthquakes and tsunamis in Japan and went on her first world tour that same year—she released her fourth album in 2013, Bangerz.  While it was among the most successful albums of her career, winning four VMAs and featuring collabs with Britney Spears, Nelly, and French Montana, it was also the most controversial, mostly owing to her “Wrecking Ball” video.  That year was wild for Miley Cyrus as she transformed as an artist.

In 2014, Miley Cyrus founded the Happy Hippie Foundation, which serves homeless and LGBTQ+ youth in LA.  The following year, Miley Cyrus & Her Dead Petz, her fifth studio album, was released but gained overall negative coverage due to her controversies during the Bangerz era.  2016 marked her debut on The Voice as a coach during season 10, the youngest person to do so, and she returned for seasons eleven and thirteen.

Younger Now, her sixth studio album, was a huge hit, and single “Malibu”—a song about ex-husband Liam Hemsworth—peaked on the top ten on the Billboard Hot 100.  On this album, she returned to her roots as a pop/country artist with a Dolly Parton collab and much brighter songs.

Cyrus’s six-track album SHE IS COMING with the single “Mother’s Daughter” was another major milestone in Miley Cyrus’s career, and she exchanges the acoustic vibes of Younger Now for a more club-like atmosphere.

A few months after her album’s release, Cyrus dropped “Slide Away,” which featured vocal echo effects, piano, synth, guitar and a trap drum kit.  In late October of this year, she announced the release date for her next album, Plastic Hearts, November 27.  The four singles and rock covers available off the upcoming album, “Midnight Sky,” “Edge of Midnight (Remix) [feat. Stevie Nicks],” “Heart of Glass (Live from the iHeartRadio Festival)” and “Zombie (Live from the NIVA Save Our Stages Festival),” usher in what is sure to be a new era.