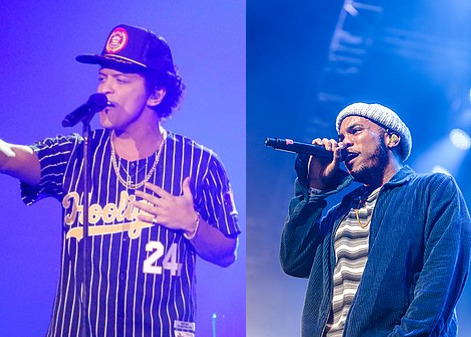 Bruno Mars and Anderson .Paak join forces for the release of their album, "An Evening with Silk Sonic." Many fans are excited for the start of the accompanying tour to promote the album in 2022.

On Nov. 12, artists Bruno Mars and Anderson .Paak—also known as their superduo nickname “Silk Sonic”—dropped their first album as a duo: “An Evening With Silk Sonic.” The album includes a variety of genres such as old school, R&B, hip hop and disco.

The album consists of nine songs, the most popular being “Leave the Door Open.” “Leave The Door Open” was the first single released in February months before the full album was released. Debuting at number four on the BB Hot 100, the song peaked at number one less than a month later. The lyrics are meant to persuade a romantic interest to come over for an evening.

Coming in second most popular, “Smokin Out the Window” depicts one’s tumultuous emotions after discovering their significant other is cheating on them.

“I’ve only listened to ‘Leave The Door Open’ and ‘Smokin Out the Window’. It’s a hard choice between these two, but I’d have to say I like ‘Smokin Out the Window’ a bit more. I like the story behind this song more because it has a chill vibe even though it’s related to heartbreak,” senior Yotam Scheflan said.

TikTok has been important in marketing the album and generating fan excitement unofficially, with audio clips from the tracks being featured on various users’ videos.

“I haven’t listened to any full versions yet, but I’ve heard clips of ‘Smokin Out the Window’ on TikTok. I looked through the comments and laughed when I saw a comment that said, ‘Bruno really threw the grenade back,’” junior Sarah Lawrence said.

While the album has received strong reviews and garnered positive student responses, other students were uncomfortable with its provocative lyrics. The song “After Last Night” didn’t appeal to sophomore Sara Elster.

“Overall I really enjoyed listening to the new album. I’ve always loved Bruno’s voice and found Anderson Paak’s voice really soothing. [But] the song ‘After Last Night’ had lyrics that made me a bit uncomfortable. One thing I can say I loved about all the songs were the beats,” sophomore Sara Elster said.

Altogether, “An Evening with Silk Sonic” is a beautiful combination of genres between two great artists. Mars and .Paak who bounce off of each other creating a record that will remain in the rotation of popular music for a very long time.