Does Big Mouth portray the reality of puberty? 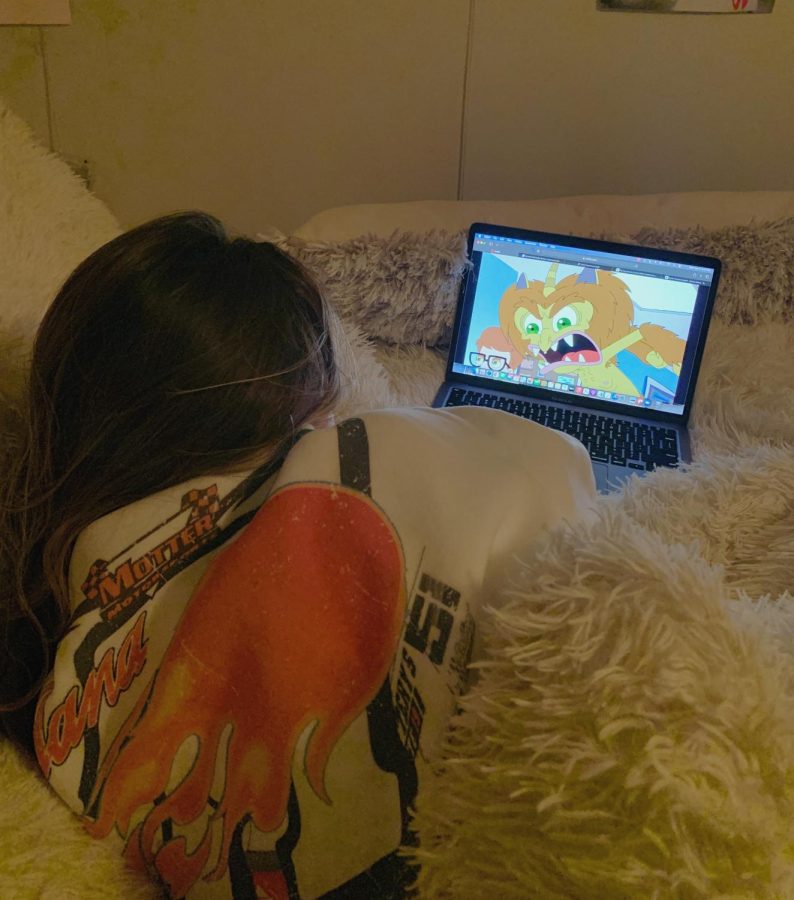 Senior Julia Beato watched Big Mouth after school in order to destress. She is able to resonate her personal life with many of the struggles some characters have.

On March 18, the adult animated sitcom “Big Mouth” spin-off “Human Resources” aired on Netflix, diving into the behind-the-scenes of the inner workings of human minds. With Maury and Connie from the original series still as the main characters, the show explores how the “resource monsters” play a role in why people act certain ways.
“Big Mouth” has been known to explore the teenage mind in a comical way, but does it really portray the reality of puberty? After watching all seasons of “Big Mouth” and “Human Resources’,” the show does portray a lot of reality teens face throughout middle and high school. With anxiety mosquitoes, depression kitties, hormone monsters and shame wizards, students face all of these struggles.
Jessi Glaser, the main female character, battles depression and finds it extremely hard to overcome. The show portrays her depression in an extremely real and appropriate way by including all parts of the struggles she has to face. From her parent’s divorce to struggling with sexuality, Jessi eventually is able to overcome all the obstacles she has to face.
We are all used to classic teenage flicks like “10 Things I Hate About You” (1999) and “Mean Girls” (2004), but the common theme was how the female character’s biggest obstacle was that the guy she liked didn’t like her back. Now, “Big Mouth” has been able to really show the fundamentals of many teens in the 21st century.
Although the show is raunchy and explicit, the reality of growing up is harsh and comes with all the mental health issues the show highlights. It portrays the lives of teens and adults and the physical and mental issues they face. Whether it is love or anxiety, the show finds a way to comically address typical human experiences.
As typical teenagers the show highlights puberty as an extremely embarrassing and private time, but the show gives an outlet for teenagers facing it to feel a relation to all its characters. The hormone monsters in the show reflect the inappropriate psyche of teenagers who are exploring something they don’t understand, and the monsters only egg on their bad habits.
The anxiety mosquitos and depression kitty find a way to make viewers feel safe knowing that facing mental health issues is okay and common among many young and older people. The anxiety mosquito puts a face and voice to the underlying thoughts our minds have. However, the show personifies anxiety as a character to remind viewers that anxiety isn’t one’s own thoughts. Instead, they are from society and those pressures to fit in.
The recurring theme of each character and monster overcoming their fears throughout the show helps viewers feel as though they can overcome their fears too. While the series exaggerates experiences of puberty and mental health, it truly does expose intrusive thoughts many young people face everyday.