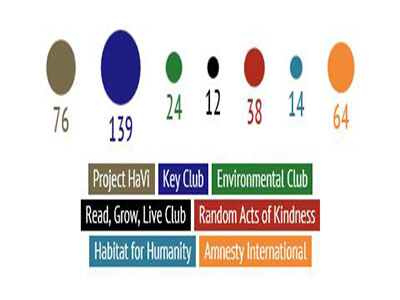 There are several charity clubs at WJ, some containing over a hundred members. But do all of those members really care?

Whether helping people in Kenya to build wells for communities, raising money to fight a disease, or selling clothes to raise money for a children’s hospital, many people enjoy aiding humanitarian causes.  However, the motivation to help may not always be completely selfless.

At WJ, where many students are looking to both help the community and add to their college resumes, there are over 20 clubs dedicated to charitable causes.

Junior Shani Kamberi, who participates in the Read, Grow, Live club as well as Environmental Club, recognizes the main motivations for students to join clubs.

“Colleges like to see that you participate in school activities. But when [I] go to a club for the first time, [I] have to have an interest in it,” said Kamberi.

Fellow junior Nora Dever, despite not being involved in any charitable clubs, recognizes the benefits of joining clubs both with and without college admissions in sight.

“[Clubs] let you see a wider view of people and different circumstances. It helps you broaden your view of the world. But I think [people in clubs are] more focused on getting into college,” said Dever.

However, not all students join clubs just to get into college. There is often an out-of-school commitment that requires genuine effort and enthusiasm, whether it is marching in rallies or holding bake sales outside of Giant. Many clubs require more than just showing up to meetings.

“It’s a big time commitment and responsibility. I participate in clubs for college of course, but then again I like them. I like the people. I like the topics,” said Kamberi.

In a school as big was WJ, not every charitable action can be seen and appreciated by the student body.

“Some clubs could still be making a difference even if I haven’t heard of them,” said Dever.

Honors Biology and AP Environmental Science teacher Patricia Tierney, who is the sponsor for Environmental Club, said she sees some charitable efforts as trivial.

“Some [clubs] that just focus on fundraising…should not focus on just fundraising but maybe also be involved personally with whatever the particular charity is. When it is just about raising money it almost turns it into a game and students want to just beat the other school,” said Tierney. “I think all these charitable clubs are great as long as they are not just about fundraising.”

Over her many years as a club sponsor of the Environmental Club, Tierney has brushed off issues with insincere members.

“[The insincere students] are the students that tend to drop out. They might show up maybe the first couple meetings and then they are not really interested. Usually, the students that are in there for the long haul, that come to every meeting or stay with the club for a couple of years, they are usually pretty sincere,” said Tierney.

On the issue of sincerity, Kamberi’s past experiences remain fresh in her mind.

“Most clubs are not genuine. In the beginning, everybody’s so motivated…and as the year goes on, it sort of falls apart,” she said.

Kamberi recalled joining a club in her freshman year where, after the first month of motivation and fundraising, the club fell apart and stopped fulfilling its mission.

However, lacking efficiency and lacking sincerity are vastly different. A lack of leadership skills as well as busy high school schedules make mobilizing dozens of high school students to take action very difficult. In the case of WJ’s clubs, the question remains whether sheer acknowledgment of charitable causes is enough to be sincere, or whether only the tangible successes of a club are indicators of sincerity.