Bad Day to be a Pumpkin: What you might have missed 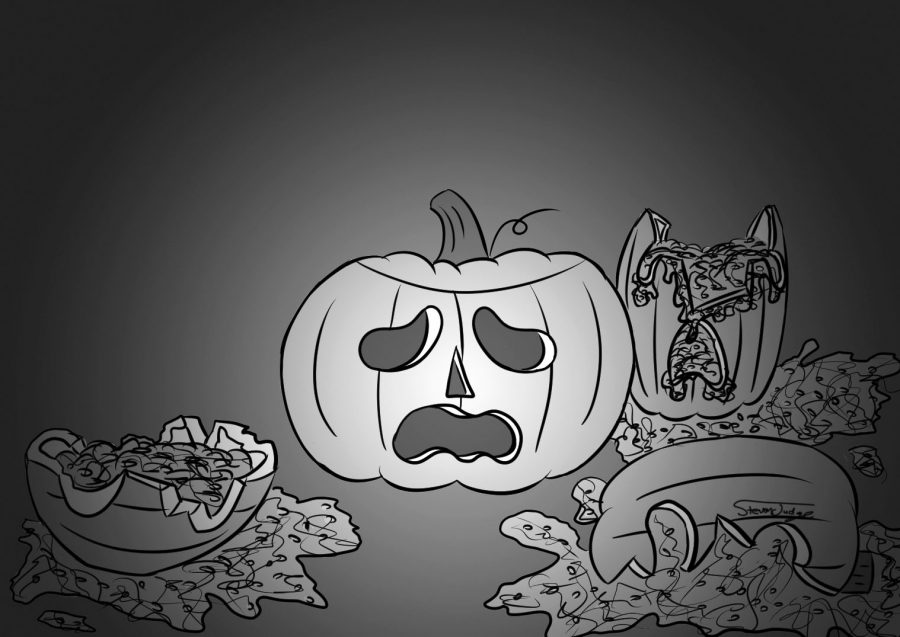 This year’s Bad Day to be a Pumpkin lunch activities were organized by art teacher, Stephanie Ellis. Ellis was also in charge of the pumpkin carving contest where the students’ pumpkin carving skills shone through as they were showcased by the tennis courts.
The Bad Day to be a Pumpkin events at lunch time started off with family & consumer science teacher Connie Pokress’ preschoolers parade down by the football field.
“[This was also a chance for many of the preschoolers’] parents to come to observe and cheer and take lots of photos,” Pokress said.
After the parade the preschoolers and the helping high schoolers went back into the school building to go trick or treating to other classes with their “special buddy”.
The next few activities were the costume contest, pumpkin pie eating contest and the Thriller flash mob. The costume contest was organized by yoga teacher Janice Cornell.
“[Anyone and everyone] who were in costume and would want to participate in the contest [could have gone] to the football field,” Cornell said.
The categories they judged on were most creative, funniest, scariest and best themed. Winners received an awesome prize of a gift card to Flippin’ Pizza.
At the football field following the events, there was the pie eating contest. This contest tested the abilities of students and teachers to see who can finish their pie first which includes finishing the crust too. This is an opportunity to eat like a pig and get all messy. Social Studies teacher and SGA sponsor Mollie Carlin managed this year’s pumpkin pie eating contest.
The Thriller flashmob was taken care of by the new dance teacher, Susan Pickett. There is only one dance class this year which Pickett is in charge of. Every year they plan on teaching Michael Jackson’s dance to his song “Thriller”. Students usually learn the dance during their class time.
Throughout the lunch period, on-going activities that happened during this year’s Bad Day to be a Pumpkin included: catapult smashing pumpkin, face painting, pumpkin photo art, Halloween ceramic artwork and digital art ghouls in schools. There were many interesting activities to see, watch and participate in during lunch and hopefully students had a bewitching time during this unique WJ celebration.