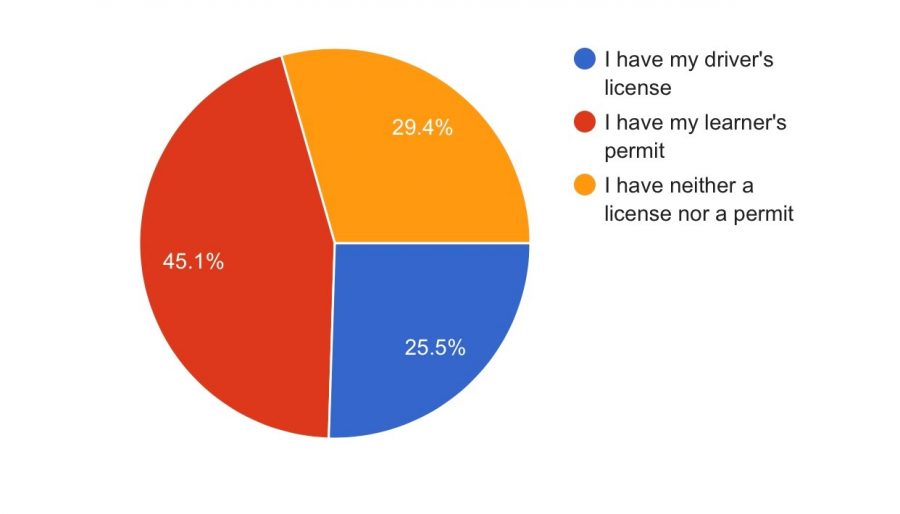 A poll of 66 juniors was taken, and the data collected is show in the graph. The students were asked whether they have a license, permit or neither. Photo by Annika Backer

Junior year is described as the year where students have to buckle down and finally take things seriously. While students are gaining more freedom and independence, they are also tasked with tackling the SAT/ACT process along with beginning to consider colleges.

While there is more to juggle, and at some points throughout the year they are overwhelmed with the never ending mountain of work, there is one thing that makes junior year enjoyable.

Getting a driver’s license is one of the most exciting times in a student’s life. It is one of the first steps towards becoming an independent adult, and most students countdown the days till they can drive on their own.

For a lot of students, it is something they have dreamt of for years, the increased freedom and no longer having to beg their parents to drive them to the mall or a friends house.

One hand, some students have no desire to drive and haven’t stayed on top of their driving hours, while others schedule their drivers test on the first day that they are eligible to take it. Despite the few who have fallen behind on their driving, the majority of the WJ juniors enjoy driving according to a poll done.

There are lots of perks to getting licensed. The amount of independence you gain is immense. Finding rides is the hardest part of making any social plan. Having your license makes a great difference in making plans with friends, with the ability to drive yourself without bothering your parents for a ride.

Junior Maddie Terry is taking her license test in just a couple weeks and could not be more ready.
“I am most excited to drive to school and be able to do my own things. I can’t wait to drive my friends places and not rely on my mom for things,” Terry said.

The state of Maryland legally requires rookie drivers to have driven and logged 60 hours with their driving instructor before taking the test.

Junior Jacob Bernstein is one of the few who actually logs all of his hours. “I drove all 60 hours and my mom yelled at me a lot,” Bernstein said. “I felt over prepared for my test.”

Bernstein as well as others had no problem passing their test on the first try, as to say 100% of the juniors who have their license passed on the first try in the poll taken.

Newly licensed driver, junior Emily Tamaro passed easily and has enjoyed the perks of driving to her friend’s houses and to school. Tamaro started driving immediately after getting her license and has had no problems.

“It feels weird driving alone, but I still feel as comfortable as I did when driving with a parent,” Tamaro said.

Getting licensed can be very exciting for the teenagers, but parents could have different reactions.

Some parents get very nervous when their kids get their license, worrying about them driving alone. They make strict rules for their kids regarding the car. However, Tamaro’s mom, Michelle Tamaro, feels very good about her new driver.

“It’s a big help. It doesn’t make me nervous because I know she’s a confident, competent driver,” Tamaro said.

Whether you have your permit or license, keep driving! It will do you well in life and give you the freedom you never knew you had.