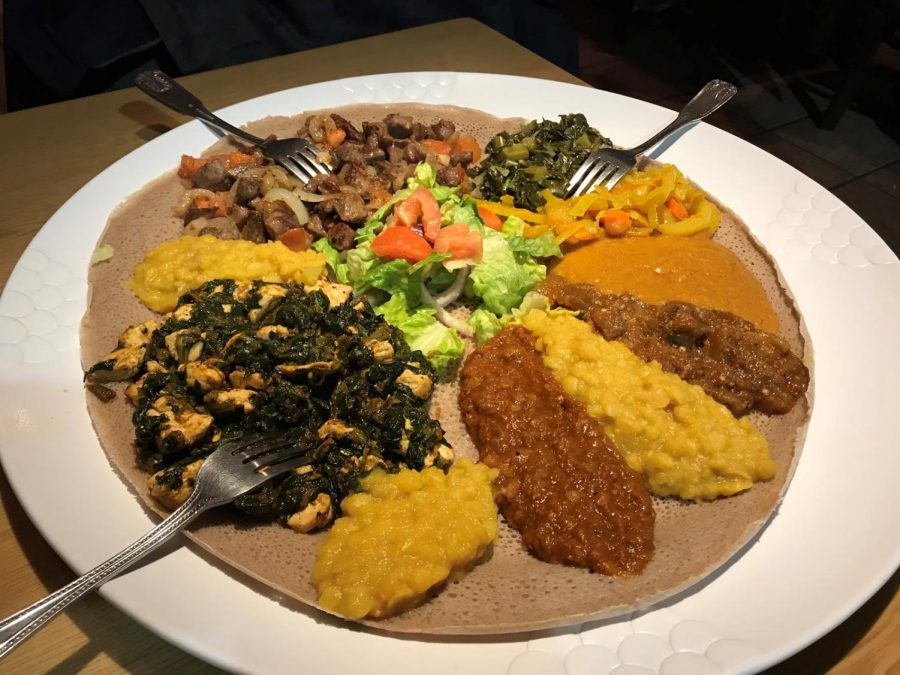 As soon as we walked into Sheba’s, we were seated almost immediately by a man who looked like he was the manager. The general feel of the restaurant was cozy, yet proper at the same time. It was dimly lit with a few lights on the ceiling and lamps above each table. Soon after we sat down, a waiter came to give us water. I took my time to decide, and I eventually chose to order the sambusa beef (seasoned prime ground beef stuffed in a lightly crusted pastry dough) and the doro be spinach tibs (chopped spinach tastefully seasoned with garlic, jalapeno peppers and traditional spices with doro tibs). My mom chose to get the vegan sampler (bergeden, key misir, beet salad, gomen, ater kik and cabbage, served with side of house salad) along with ethiopian spiced hot tea, while my dad ordered the yebeg tibs (tender lamb cubes marinated and sauteed with onion, garlic, tomato, ginger root and other spices).

Once we ordered, I had more time to look around the restaurant. The walls were covered with alternating rectangular mirrors and traditional Ethiopian art. In the back of the restaurant, a TV displayed a waterfall slideshow. There was Ethiopian music, but it was soft and unobtrusive. The food took around 30 minutes to arrive, but after a while, the manager came out and assured us it would be ready soon. Shortly after that, it came on a large circular plate.

The food was colorfully arranged in sections on a large circle of injera, or Ethiopian bread. We were also brought a plate with three extra rolls of injera and even more later on in the meal. Though forks were brought out, Ethiopian food is usually eaten by hand, so we didn’t really use them. The food itself tasted pretty good, but the lamb of the yebeg tibs was chewy and ultimately flavorless. As for the chicken and the spinach, they really complimented each other, and better than I thought they would. For the vegan sampler, however, I felt it just didn’t really hit home. Most of its aspects were either okay, as they were mushy and bland, or left a bad aftertaste. However, the crunchiness of the crust and flavor of the beef really go together well in the beef sambusa. The tea was a nice way to warm up, in addition to the spices making it unusual. The injera was also good with its unique and spongy texture.

All in all, it’s a nice restaurant with good food and good service, and it would be good for a date as the price is quite affordable. For three people, it costs a bit under $60, so around $20 is a safe bet for one person. Sheba is a good place, and a nice opportunity to explore a new cuisine, especially one where you can get your hands dirty.