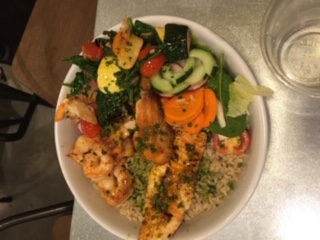 When searching for a bite to eat on Rockville Pike, many may overlook the new restaurant, Slapfish, in favor of popular choices such as Cava or Chick-Fil-A. Slapfish offers a similar casual atmosphere while offering fresh, healthy options that will satisfy any fish-lover.

Upon entering Slapfish, there is a crowd by the corner reading from the vast, wooden menu deciding what to order. The menu consists of various salads, bowls and sandwiches that all have a type of fish incorporated somehow. Despite having many options, the number of soup choices was slightly disappointing, as there was only clam chowder.

After eventually narrowing our selection down to some healthy food options including the poke bowl and power bowl, we were greeted by friendly employees who patiently described the fish choices in each bowl and recommended some favorites. The bowls and salads give customers the option of choosing the type of fish they want to be paired with the same toppings. This was a bit questionable, considering each fish has a different flavor and may not pair well with the standard seasoning. Next to the cashier was a long list of the fish choices and a short explanation of the benefits of each. It even pointed out which fish were not farmed.

Following the order, we were given a numbered sign and were allowed to sit at any of the empty wooden, rustic tables that added a nautical feel to the restaurant. A little while later, our food arrived with a smile but no silverware.

The poke bowl had fresh tuna that was flavorful and tender. It was balanced with rice that was covered in a green sauce which was tangy and blended perfectly with the tuna. There was also lettuce, radishes and cucumber that made the bowl taste fresh and healthy. Although the tortilla chips seemed like a nice touch, each chip was either too bland or covered in a sweet seasoning that didn’t match the savory bowl.

The power bowl came with three different types of fish: shrimp, salmon, and tilapia. The bowl was based with seasoned brown rice, and also included roasted vegetables.

If you’re really hungry, this is definitely the bowl for you. I didn’t even get halfway through it. The shrimp and salmon were both buttery and delicious. I didn’t care for the tilapia much because it had a weird aftertaste; however, all three fish were cooked to the right firmness.

The seasoned rice was on the bottom of the fish, so all the seasoning naturally piled on top andthe rice became mushy and the seasoning in the middle of the bowl was overly concentrated. The vegetables were cooked to absolute perfection and were extremely tasty.

The bowl with mahi mahi had the same tasty rice as described in the poke bowl, but the mahi mahi was a bit overcooked and bland. Though it was capable of satisfying hunger, it couldn’t satisfy any particular craving as there wasn’t much to it.

There are various healthy options at  Slapfish and while not all the choices met the competitive quality other restaurants offer, it provides many options and a great atmosphere for anyone looking for a casual place to get fresh, healthy food.