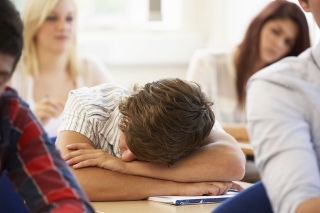 Sleep deprivation can have serious long-term consequences. Students are sleeping less and less every night, and are suffering as a result.

Scientists at the NIH believe that the average teen should sleep between eight and 10 hours per night. When this advice is followed, students will feel refreshed, alert and calm. Yet many students struggle to get what is deemed by experts to be an adequate amount of sleep.

A lack of sleep one night might cause irritability and lethargy the next day, but a prolonged period of insufficient rest could have serious consequences. The negative side effects could include a weaker immune system, greater susceptibility to heart disease and depression.

“Sometimes I’m really tired and lack focus,” sophomore Anushka Tandon said. “I struggle to complete simple tasks as quickly as I should be able to.”

Sleep deficiency has been a contributing factor to some of history’s most infamous moments. For example, the 1979 nuclear accident at 3-Mile Island in Pennsylvania, as well as the most devastating nuclear meltdown in history, at the Chernobyl nuclear power plant in what is now Ukraine, were both caused by simple mistakes related to sleep deprivation. Poor sleeping habits also were instrumental in the Exxon-Valdez oil spill and the calamitous explosion of the space shuttle, Challenger. These costly errors could easily have been avoided by sufficient sleep.

A study by the National Academy of Medicine reports that over one million injuries and between 50,000 and 100,000 deaths each year result from preventable medical errors, many of which have been determined to be a direct result of a lack of sleep.

The lack of nighttime rest appears to be a burgeoning problem, and students faced with this issue have begun to try and combat it.

“I definitely need to be sleeping for at least 7-9 hours per night,” junior Eric Yang said. “People don’t have good habits. We procrastinate as soon as we get home and don’t get to our homework until late at night. It fuels a vicious cycle that prevents us from getting a good amount of sleep.”

The factors which contribute to poor sleeping habits vary from person to person. People tend to struggle under pressure, and a large workload and excessive stress could potentially derail plans for a peaceful night. Some cope with this better than others.

“I sleep about 5-6 hours on an average night,” junior Anton Preslopsky said. “I rarely feel well-rested, but I’ve gotten used to it, I can stay awake during the day. The 6:30 a.m. wakeup time is the real killer.”

Students continue to struggle as they try to find a balance between work, leisure and sleep. This can lead to routine and habit changes both large and small.

“I need to stop procrastinating,” Yang said. “I would sleep a lot better if I did my work first, and then relaxed for the rest of the evening.”