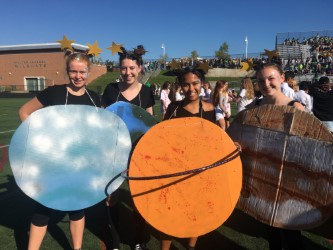 On Friday, September 15, the first pep rally launched us into the new school year, taking place outside in the football stadium. With the start of a new school year comes new traditions like the Cattle Call and the Wildcat vs Mad Cow fight. Following these events were performances from poms and varsity cheer, as well as the fall sports teams’ showcase.

The Cattle Call, which was inspired by Iceland’s “viking war chant,” encourages students to clap and “moo,” lead by the rhythm of the drum. As the beat gets faster, the clapping and “mooing” are supposed to follow with it.

This new addition was well-liked by most students, including senior Aidan Sandman-Long who prefers this over the old chant.

“I was never a huge fan of the roller coaster, but I liked the idea of the drum thing they did this year,” Sandman-Long said.

Students also enjoyed the newly introduced Wildcat vs Mad Cow fight. While the two mascots tried to tackle one another in order to demonstrate their dominance, students laughed and cheered. Through all the hitting, pushing and grabbing, the Mad Cow persevered and won the battle.

“It was funny because of how dramatic it was and how the [Mad] cow won, even though it was against the Wildcat,” junior Janie Trombley said.

“I liked poms and I liked seeing all the costumes that the sports teams did. I thought that was pretty cool,” freshman Victoria Rentsch said.