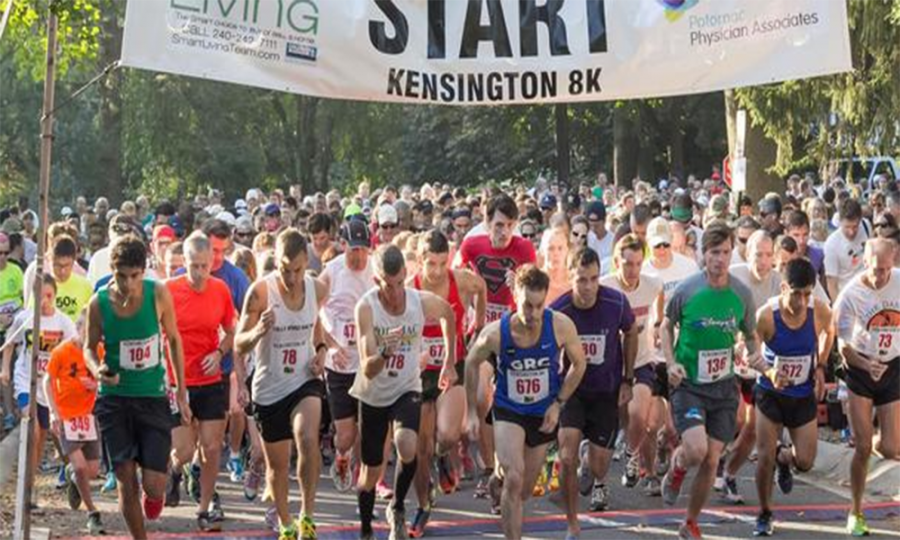 The Kensington 8K race attracts hundreds of runners from all over the Maryland, D.C and Virginia area, encouraging them to come and run a variety of different length races each year.

Contestants can run the eight kilometer race (8k), the two mile race, or the one kilometer fun run. The 8K is a competition mostly run by teenagers and adults, and the winner is rewarded with cash prizes. The two mile is run mostly by kids and teenagers with the prizes being gift cards. The 1K fun run is predominantly run by parents with their children who want to get some exercise and have fun.

Both the 8K and the two mile start in Warner Circle, in the heart of Kensington. Contestants then go down Armory Avenue, through Howard Avenue, down Kensington Parkway, then down Beach Drive and back around. The two mile race ends at the intersection of Beach and Connecticut Avenue, but the 8K keeps going and loops back towards the Kensington Town Hall.

The races have happened every year since 1994 and are sponsored by a variety of local political candidates and businesses. The money raised by the races every year benefit schools in the Kensington cluster of schools, including Kensington Parkwood Elementary, North Bethesda Middle and Walter Johnson High School. It costs $30 to run the 8K, $17 for the two-miler and $14 for the fun run.

This year, the races took place on Saturday, September 23, with the two-mile being the earliest of the three races at 7:45 a.m.. and the awards being announced for all three at 9:30 a.m..

This year, the winning time was 26 minutes and 20 seconds, set by 32-year old male Desta Beriso Morkama from Arlington, VA. The all-time record was set back in 2009 by Joseph Gray, with a time of 25 minutes and 27 seconds.

One of the many participants who ran the 8K this year from WJ was sophomore David Tuszynski. Tuszynski has now run the long race two years in a row and has loved every minute of it.

“My favorite part of the race is having fun running and watching everyone else have fun running,” Tuszynski said.

His goal for this year was to improve upon his time from last year, and that he did.

“This year, I think I did better than last year by about a minute,” Tuszynski said. That’s a great improvement and he certainly hopes to get even better next year.

The three races take a lot of work and a lot of people to help plan and set up. The two main directors are parents of WJ students, John Seabreeze and Kathryn Markey. There are a plethora of steps to the planning.

The 8K requires permits from the parks, certain vendors, secure certain sponsorships and reserve roads, just to name a few.

Even though the planning takes an entire year, it doesn’t kick into full swing until the 8K starts to approach.

“It’s a little bit of work the first 10 months, a medium amount of work the next month and a lot of work for the last month,” Seabreeze said.

Every year, WJ students, parents, alumni and teachers run in at least one of the three races. This year, about 17% of all runners had some relation to WJ. Some of the benefits from the race go to WJ. First, the largest portion of the money raised goes to Kensington Parkwood Elementary School. WJ and North Bethesda Middle School then split the remaining amount. Since 2009, WJ has received about $36,000 in funds that the school then puts to good use.