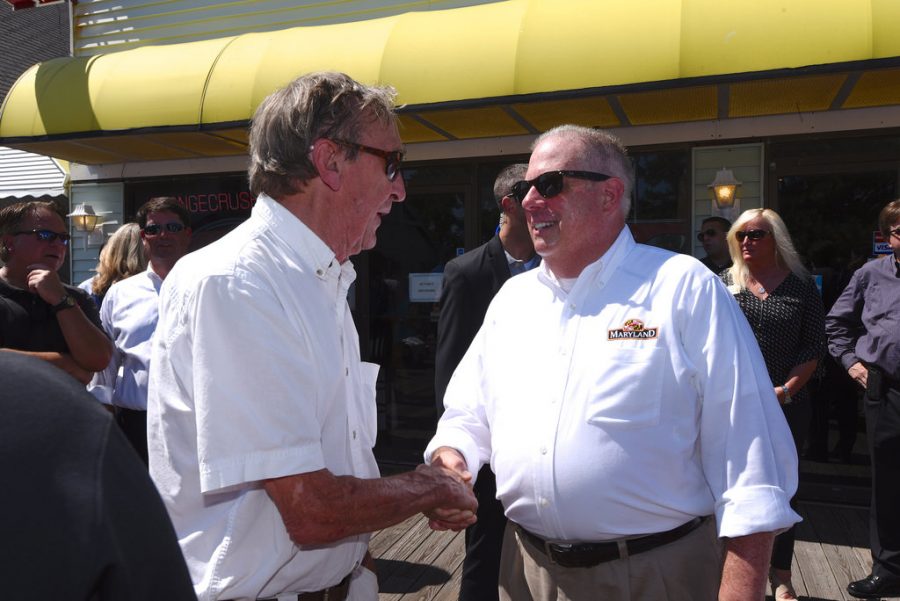 Maryland Governor Larry Hogan talks to citizens about the school start time change. The decision to start school after labor day sparked a lot of controversy within the public.

Last year, Maryland Governor Larry Hogan signed an executive order that requires all Maryland public schools to begin after Labor Day and end no later than June 15. Hogan cited many reasons for the action, including the competitive opportunity for Maryland’s economy and many of its leading sectors, such as tourism and hospitality, as well as the importance of Labor Day travel during the transition between the summer and fall seasons.

“I don’t really like it, [but] I guess it’s good for the economy, especially in Ocean City because there are going to be more visitors,” senior Emily Choi said.

This executive order however, has proved very controversial. The shortened school year has made it difficult for school systems to fit in all the required days with the necessary breaks and holidays. This has resulted in a severe cut on the number of teacher work days, placing extra pressure on teachers to get their planning and grading done.

“It doesn’t allow us flexibility in the calendar to have a weeklong spring break and also have other days off for holidays, election days and also build in enough snow days,” Social Studies teacher Katherine Simmons said.

The new MCPS calendar that resulted from this executive order has very few built-in snow days, as well as a shortened spring break this school year. These changes upset many teachers and students alike.

“I don’t think [Hogan] was taking into account the weather and the snow days…. [and] if we started school at a regular time, in late August, there wouldn’t be that many repercussions,”  Choi said.

On February 12, 2019, the Maryland State Senate passed a bill, voting 31-13 to overturn Hogan’s executive order on the school start and end dates. The bill puts the decision of setting the start and end dates back in the hands of local school boards. The votes aligned closely with party lines, with Democrats voting for the bill and Republicans voting against.

The bill is now headed to the House of Delegates, the other chamber of the State Legislature, to be voted on. If passed, Governor Hogan promised to put the question to a referendum where Maryland voters can give their voice on the issue. It is currently unclear however, how the citizens of Maryland would vote if a referendum did occur, with Hogan citing strong support of the post-Labor Day start date.

“Hogan repeatedly has said that the majority of people of Maryland like starting after labor day and I’m not sure where he’s getting that data from, because most parents that I speak to in Montgomery County are against starting after Labor Day,” Simmons said.

However, despite the issue predominantly affecting students, many of Walter Johnson students remain unaware of where the changes in the school calendar are coming from and of this new bill that seeks to revert the changes.