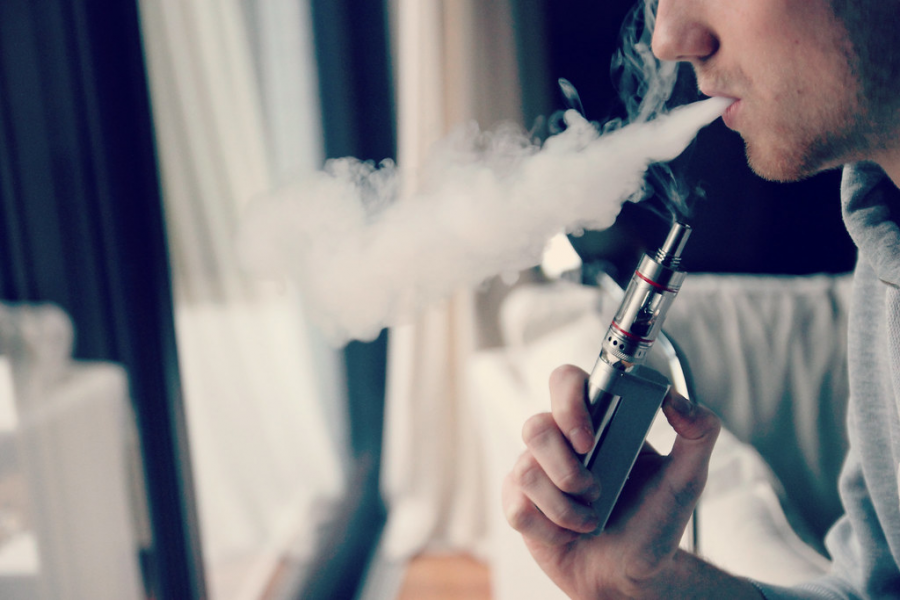 Vaping has gained popularity over recent years, especially with teenagers.

A new lung disease that is linked to the use of e-cigarettes and other vaping devices has made headlines over the last few weeks and has sparked conversations at WJ, including a presentation in homeroom classes about the dangers of vaping. These reports have raised concern for many nicotine-addicted students as vaping has been a primary aspect of the drug culture at WJ due to students having easy access to vape products.

The new disease has affected many minors who were regular users of vaping products. Symptoms include coughing, shortness of breath, chest pain, nausea, vomiting, fever and difficulty breathing.

“I’m not surprised that this is happening. Obviously, there were going to be some harmful consequences,” junior Malhaar Nair said.

Vaping first emerged as a trend at WJ a few years ago and has become more accessible recently, as the newer vaping devices are very small and can look like regular items used at school such as flash drives and pens. Students have easy access to many nicotine and flavored vape products since Maryland law allows the sale of vaping devices to individuals ages 18 and older, allowing some seniors to get a hold of these products and sell them to their younger classmates.

“Usually I would just borrow my friend’s dab pen that she got from her older sister,” an anonymous junior said.

Parents, teachers, administrators and doctors have been warning students about the dangers of vaping for a few years, though many of the side effects are unknown due to the low amount of research done on vaping.

“I hope this news can help some students change their patterns and behaviors. I talked about this at the junior class meetings, hoping that folks would listen to the warnings about it,” Assistant Principal Terry Heintze said.

In order to raise awareness about this issue to WJ students, teachers gave a presentation in homeroom classes about the dangers of vaping. The presentation was made by Principal Jennifer Baker and included videos and facts about vaping and its potential consequences, but many students don’t think it will get the reception it intended.

“I know the school is trying to help us and I appreciate the effort, but I don’t think it is going to change the choices teenagers who vape make, ” junior Ashley Rinehart said.

Authorities have linked a chemical derived from Vitamin E to many of the cases. This chemical is most commonly found in flavored nicotine and THC vaping products. Flavored products are often used by companies to make their products more appealing to young people, who are at the highest risk for this disease because their lungs are still developing.

After these reports of illnesses related to vaping, many students who are worried for themselves and their friends who vape are pledging to stop using these products.

“I definitely will stop using nicotine products. I’m not sure about dab pens but I will try to reduce the amount I use them,” an anonymous junior said.

Many agree that this new information regarding the dangers and consequences of vaping has been a wake-up call for users who didn’t originally know what would happen when they started.

“I think that people will become more aware, especially students,” Nair said. “This overall just goes to show that you should think about what you’re doing before doing it.”