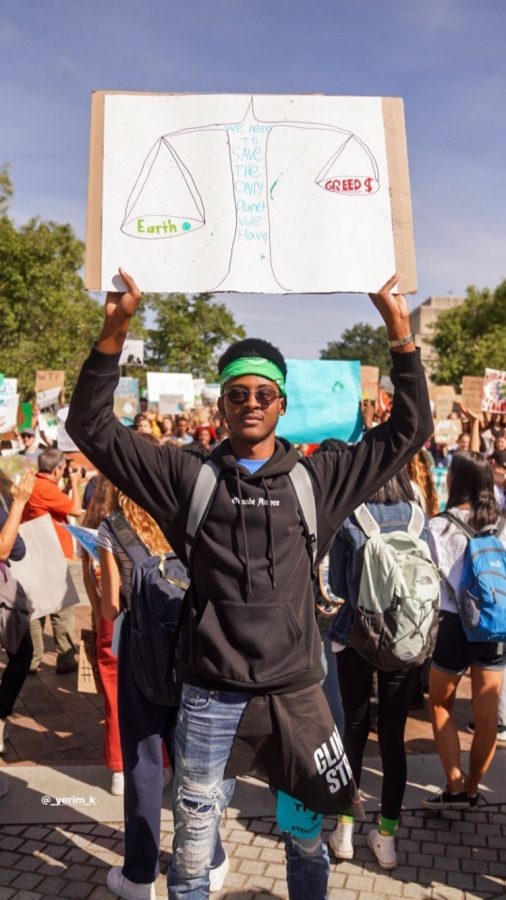 Senior Yerim Kone holds up a sign expressing his frustration with the government and how they are handling climate change during the massive protest.

As hundreds of students filed into the streets across the world for the Youth Climate Strike, many WJ students sat in class wishing to join in on the protest. Despite directions from county executive Marc Elrich to allow students to participate in the climate strike, Montgomery County Public Schools refused to excuse students’ absences from school to engage in the demonstration against climate change.

Elrich proposed the addition of a new absence rule in response to the overwhelming student pressure to allow them to participate in social advocacy. The prospective rule allowed students to excuse up to three absences per semester specifically for protests.

If this proposed ruling was set into place, Montgomery County would be one of the few counties to allow their students to skip school to participate in social advocacy events.

The Montgomery County School Board denied this proposed rule stating, “we believe that students who wish to engage in the civic process during school hours should do so while at school, in a supportive and safe learning environment. Leaving school property not only disrupts instruction for other students, it poses a significant safety risk.”

Another main concern was that students would abuse the new precedent by skipping school for reasons other than social advocacy while still being able to make up work for full credit.

“If I was able to get my absence excused, I would most probably just go home rather than participate in the march,” an anonymous student said.

However, there is a large portion of the student body that is itching to exercise their freedom of speech and feels the school board is taking this ability away from them.

“There is a whole community of social advocates at Walter Johnson but many could not join the protest because they knew they would not be able to make up work that was done during the Strike,” senior Yerim Kone, a self claimed Social Justice Advocate, said.

An estimated 4 million students skipped school according to environmental advocacy group 350.org, but Kone states that he and his fellow advocates are hungry for more.

“I think there is power in numbers, the more the merrier, especially when it comes to civil action,” Kone said.

If Montgomery County had allowed their students to freely participate, an estimated 160 thousand more kids could have the potential to be present at the protest.

“Not being able to excuse my absence definitely played a part of not being able to go the climate strike,” senior Lila Byer said. “Hopefully in the future the school board can figure out a way to allow students to participate in these events without sacrificing their education.”