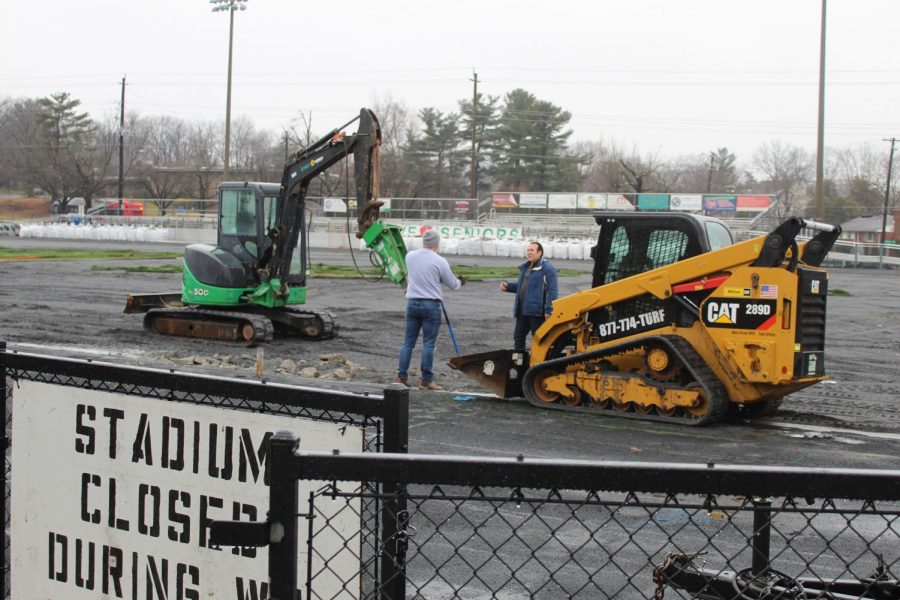 MCPS authorized a $700k project to replace the artificial turf at WJ at the end of last month. According to MCPS Chief Operating Officer Andy Zuckerman, the turf will become a safety issue after this year due to its 10-year life cycle.

The costliness of the new turf comes after concerns about the recycling plan for the previous field. Construction began in late January and is scheduled to be completed in March 2020, weather permitting.

The new turf sparked a lot of conversation over the price, as many claim that the turf is a “colossal waste of funds,” arguing that using a grass turf is a better idea.

“I think that we can use the money for the turf for much better things,” sophomore Sara Susa said.

Principal Jennifer Baker sent out an email informing the WJ community of the replacement and said that while construction is going on, access to the stadium will not be permitted. The contractors have put up a large, inner fence that restricts entry to the building on the perimeter of the field. In her email, Baker also addressed the issue of students jumping the fence.

Students who park in the lot at Davis Library or live in the surrounding neighborhood climb over the locked fence in order to get on and off school property. Students are concerned that the ongoing construction will impede their walk to the building.

“I personally really don’t like having the gate locked. It’s a big inconvenience having to walk through the student parking lot and there’s no sidewalk sometimes,” junior Mia Chai said.

Students have voiced their concerns over the locked gate already, and the construction will only worsen this. The gate will remain locked for the extent of the field installment\; however, all other entry points from Democracy Blvd. will stay open.

“I sometimes use the back gate to get back into school and now with the turf construction, I have to walk all the way around to the front entrance from Davis Library which can be really annoying on a windy or rainy day,” sophomore Jazmine Robinson said.

While some students are concerned about how the construction will impact them, WJ athletes are looking forward to the new turf since the old field was slippery and outdated.

“I’m happy about the new turf because I wasn’t too fond of the last turf. It was way too slippery when it was raining. I can’t wait to play on the new turf in the fall and see if it is as good as the other schools’ turfs,” junior Ian Griffin said.

While the tentative end of construction is next month, delays in the installation schedule could affect spring sports such as lacrosse.

“Lacrosse will be impacted a lot [because] we have to practice at another school or at the back fields… and they don’t have lacrosse paint on the field,” senior Allison Hilligoss said.

While the turf will present a newer, safer alternative for athletes in the years to come, many WJ community members are discontent with the price of the field and how its construction is affecting entry to the school.

Construction workers discuss the next step in replacing the turf. In the meantime, the stadium is closed until the construction is finished. The construction should be completed in time for the spring sports season.