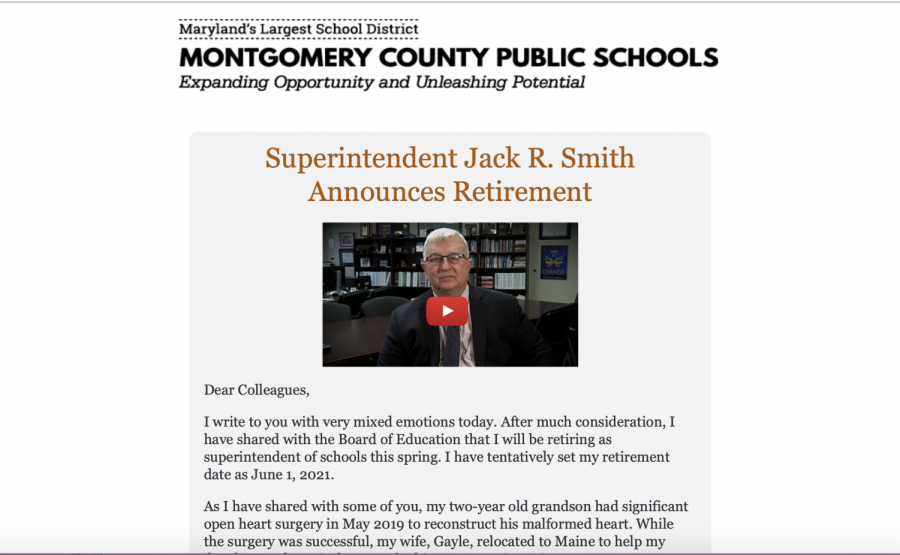 A screenshot of the message posted to the MCPS website shows the video and letter that Dr. Smith released to announce his retirement.

MCPS Superintendent Jack Smith announced his pending retirement in a letter to MCPS staff on January 14. In the announcement, he praised their work and revealed his reason for leaving.

Smith is going to be moving to Maine to join his wife, who moved there last year, in order to help care for their two year old grandson who has special health needs.

“Given his health needs, our family’s circumstances are not going to change for at least the next few years, I need to join Gayle in Maine to support our grandson as I find I can no longer tolerate living most of the time separately,” Smith wrote in his letter.
His retirement is set to begin on June 1.

In addition to the letter, Smith released a video online for students and parents detailing similar information.

Though Smith is not a household name for most students, the superintendent plays a critical role in managing the County’s schools.

“Even though I and presumably other students didn’t know much about Dr. Smith, his retirement announcement is really heartbreaking and I hope the best for him and his family going forward,” junior Aurelia Baier said.

Smith’s announcement was met with praise for his past work from fellow county leaders like County Executive Marc Elrich and president of the countywide PTA Cynthia Simonson.

The Board of Education has announced that they will be naming an interim superintendent as soon as possible and will begin the search for a new permanent superintendent.

Finding a superintendent to run MCPS is often a challenging task. It is among the largest and most diverse school districts in the nation, and managing the education and logistics of its 175,000 students and staff requires experience and grit.

It took over a year for the Board to select Smith after the resignation of previous superintendent Joshua Starr. It is expected by many to be even harder this time because of the challenges that educating during the COVID-19 pandemic pose and reluctance from superintendents from smaller districts, many of whom would normally jump at the chance to join MCPS, to abandon their own districts at such a challenging time.