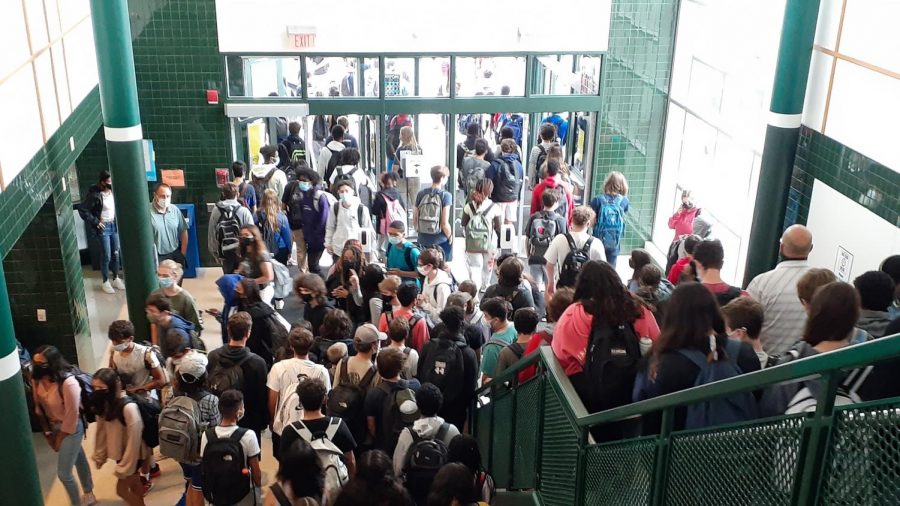 WJ students struggle with navigating the hallways and making it to class on time as the WJ student population increases.

As years go by and the student population increases, students at WJ are continuously expressing their concerns about overcrowding and hallway traffic.

Students only have six minutes to head to class on normal days but many are still struggling to get to class on time, causing teachers to mark them tardy which can result in academic penalties.

Many students have voiced their frustrations about hallway traffic.

“The traffic in the hallways is very annoying and teachers don’t understand how crowded it is and how we’ll end up being late because of it,” senior Sara Susa said.

Students also worry about the spread of COVID due to hallway traffic as students are crammed together in narrow hallways, senior Anais Harley being one of them.

“The traffic in the hallways is not the best way to avoid the spread of COVID. Also some people walk so slow, I want to smack them on the head,” Harley said.

After a year and a half of virtual schooling, this year has been the first year for many students to experience inside the school building. So, the crowded hallway traffic at WJ is more crowded than ever due to students still needing to learn how to navigate the building.

“I came from a private school so there was barely any traffic and this is my first year in person so it is overwhelming. Sometimes it takes me forever to get to class because it’s so crowded in the stairways and they’re blocked off,” Liebreich said.