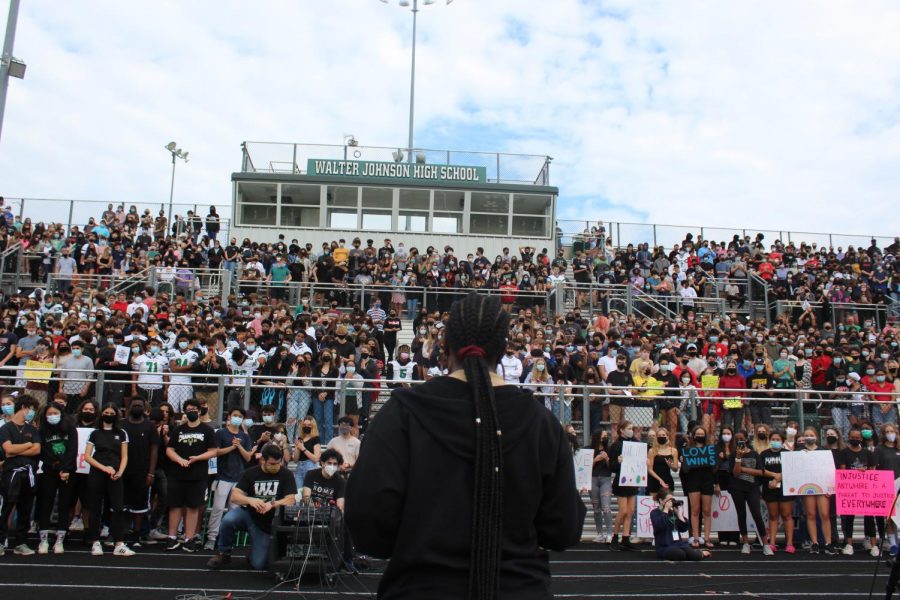 Junior Shiima Nantulya stands up in front of the entire student body at the student-led walkout. Nantulya, along with other student leaders spoke in response to the vandalism on and around WJ property.

The Stand Up to Hate rally provided an opportunity to address the recent vandalism and larger equity issues across campus. Since that time, WJ has seen numerous impacts: some positive and change provoking, and others not so much.

Going into the event, student-run clubs (The Black Student Union, Minority Scholars Program, Gender and Sexuality Alliance, Immigration Advocacy Club, and Uplift WJ) collaborated to plan the event and put in an incredible amount of work to make the affair run smoothly.

“It was really hard to pull it together in just four days because there were only about 10 of us. There were several meetings with the administration to make sure that everything was running smoothly, but I do wish there were more student voices because things could have been more interactive and beneficial in the long run,” Black Student Union President senior Joyce Onana said.

Reflecting on her role as a speaker, junior Shiima Nantulya described her overall experience during the event as a positive one.

“It was so incredibly moving to speak and the overall response was really positive. Having students listen to us was very validating to the speakers to see everyone’s response and everyone’s eyes on us,” Nantulya said.

The student organizers, their work, and their passion was very clearly presented to the students and staff in attendance. Students were considerably impressed with their peers’ courage.

“I was really impressed with the student organizers and I think it went really well. I was definitely impacted and I think most of my peers were as well. I just hope that this results in real, tangible change,” junior Mia Goode said.

Teachers were substantially impressed with the student activity associated with the walkout as well.

“It’s very difficult to organize a lot of people who all have different reasons for being there or not being there and there was obviously a lot of work put in ahead of time, so that was impressive,” AP Government and Politics teacher Elizabeth Kelley said.

Because the student and staff experiences of the event differed greatly based on their level of participation, the future implications are yet to be seen. While the rally provided an eye-opening experience for some, others were not phased.

“I do think that we have made an impact on a lot of people because many people were coming up to me and telling me how moved they were” Nantulya said, “other students were forced to go and only attended for performative purposes.”

The walkout was just a single event intended to sum up a plethora of experiences. Students believe that the activism and fight for change shouldn’t and won’t stop there.

“I hope that people will continue to validate, listen to, appreciate and protect people of color because I think if everyone spoke up, many of the experiences that we go through, that we shouldn’t have to go through, could be minimized,” Nantulya said.

In response to the rally, recent hateful events and student reactions, the administration has implemented a series of programs to address the current environment. These actions included a slideshow in homeroom classes and an anonymous online form enabling students to voice their experiences and make recommendations directly to the administration.

“I recognize the effort that the administration is making to address these events and try to change things, but a 30-second slide show and meaningless questionnaire in homeroom is not the way to accomplish the much-desired change. If admin could listen to the students on how they wish to continue to spark change and maybe put some more thought into it, we would be much more successful at bringing the change we want to see,” Goode said.