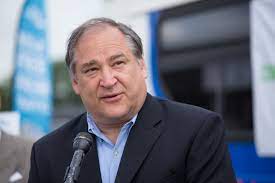 In Montgomery County, a county where Joe Biden won in 2020 with a margin of over 59 points, democratic victories are more likely than not. Maryland’s congressional delegation consists of seven Democrats and one republican while Democrats hold veto-proof majorities in the state legislature and many county offices. Oftentimes, especially in urban counties, the democratic primary is more competitive than the general election race itself.

The Maryland Democratic Primary is scheduled for July 19, 2022, where registered Democratic voters will vote for the democratic nominee for governor, county executive, congressmen and other elected officials. The primary was originally scheduled for June 28 but was pushed back after the Maryland Court of Appeals struck down Maryland’s proposed congressional maps, ruling that they were gerrymandered.

In the Maryland gubernatorial race, incumbent Republican Larry Hogan is term-limited, having been elected in 2014 and 2018. Hogan was elected and re-elected by wide margins in the heavily Democratic state, bucking trends and garnering one of the highest approval ratings for a governor across the country.

In the race to replace Hogan, democrats again are now heavily favored but seek to find the right candidate to break the enigma of the governor’s mansion.

On the Democratic side, many candidates have thrown their hats in the ring to be the democratic nominee. The leading candidates are Maryland Comptroller Peter Franchot, former US Secretary of Labor Tom Perez and author Wes Moore. In recent polling, Franchot leads at around 20% while Perez and Moore garner around 10-15%.

In the Republican primary, former State Delegate Robin Flicker is running against former Maryland Secretary of Commerce, Kelly Schulz. Flicker is endorsed by former President Donald Trump while Schulz has been endorsed by Hogan. Polling from May 27-June 2 shows Schulz ahead of Cox 27% to 21%.

“I saw all the people who are running for governor and I thought the ballot’s gonna be longer than a CVS receipt,” New Jersey Democratic Senator Cory Booker said during the MD democratic party’s annual gala in May.

“The county executive race is a lot more important than people think and it impacts many important policies and groups such as the county budget and education committee,” junior Whittaker Johnston said.

Besides the governor and county executive race, there are many other elections at the county, state and national levels. All eight Maryland congressional districts will be up for election, while many state general assembly and state senate seats will also be open. In addition, elections are also being held for county positions on the Montgomery County Council, Montgomery County Board of Education and sheriff.

“Education, transportation, infrastructure, a lot of that is done at the state or local level so politicians who we elect into office at the local and state level arguably have an impact felt on a more real basis everyday,” AP US Government & Politics teacher Tobias Meier said.