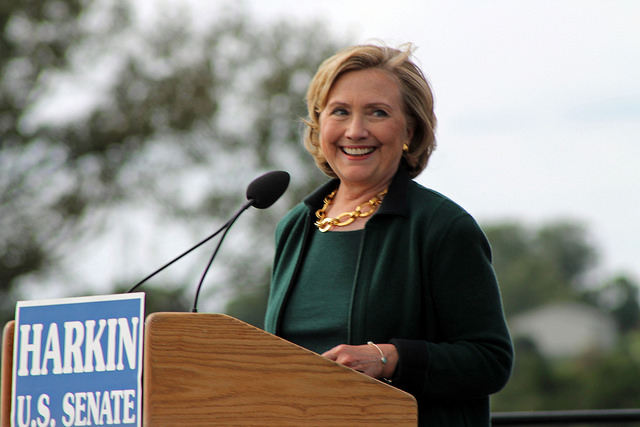 Back in 2008, I was a nine-year-old with a justified lack of understanding of politics. However, I had one dream: to become the first female president of the U.S. When I got wind of Hillary Clinton’s campaign, I harbored a deep hatred for her solely based on the fact that she had the potential to steal my title. During the course of the election, I watched a few inspiring campaign ads and grudgingly decided that if anyone were to steal my future job, I would allow it to be Hillary.

Although  my career aspirations have changed and I no longer hold any desire to be in a position as tough as the presidency, I still would allow Hillary the win over anyone. Over the course of my middle and high school career, my appreciation for Hillary has grown into an ardent love, a love which was once widely accepted and now frowned upon by many of my peers. Around the start and middle of Obama’s second term, everyone seemed “Ready for Hillary.” Now, millennials everywhere are “Feeling the Bern.” Is it because millennials see the current problems in the government and economy and truly think that Bernie Sanders’s policies have more potential to be effective than Hillary’s? Or is it because it’s “cool” to support the new and exciting Sanders as opposed to boring Hillary? The pressure to support Bernie is felt strongly in millennials. Supporting Hillary can be seen as ridiculous, ignorant or is simply chalked up to misguided feminism.

Hillary has often been accused of “trying too hard” to appeal to millennials. Her Snapchat account and “Yaaas Hillary!” shirts don’t really help her in that area. However, what those mocking her fail to realize is that this election is largely an online one. Online presence (and I don’t mean spam tweeting hate like Trump) has become a huge factor in this election. Hillary’s campaign sees this. “Trying too hard” is not a bad thing – it is a necessary step in getting votes. Of course she is trying to appeal to millennials- it would be much more difficult for her to win if she completely ignored a huge demographic.

As we are all well aware, Hillary Clinton is not a naturally likable person. And that makes this election ten times harder for her. While many are naturally drawn to Bernie Sanders because of his undeniable energy and charisma, Hillary doesn’t have that leg up. This is why she often falls behind.
People get lost in the presentation or reputation of a candidate and tend to forget about the important things such as experience, strength in policy and background. As a former First Lady, New York senator, and secretary of state, Hillary has unrivaled experience in politics under her belt.
She has dealt with intense scrutiny, and struggled with mishaps and scandals.  Over the two-decades long course of Hillary’s career, she has dealt with things that none of this year’s candidates can say they have. However, this is often simply brushed aside. Hillary is America’s steady. She is a constant figure in politics who is not seen as revolutionary, unlike Sanders. She is a moderate progressive who can get things done. I simply don’t feel as confident in any other candidate. While Sanders’s promise of free college is dreamy, I can’t look past the impracticality of his plan. Hillary offers a practical approach that I feel comfortable trusting.

Another issue for her is the fact that Hillary is a woman. While it is ridiculous that this is even remotely a concern in 2016, many simply don’t think a female has the potential to be a great commander-in-chief. I believe that women need a voice in politics and Hillary can speak for such an all-too-often-overlooked demographic. Sexism is rampant in today’s society, and Hillary has taken the brunt of it during this election. Yet she still stands tall and inspires women everywhere just as she has since she officially declared her candidacy back in April. It just is another obstacle that Hillary, and Hillary alone, faces during this election.

I can’t end this article without bringing up the elephant that is constantly in Hillary’s room. The email scandal, her inconsistent support for gay marriage, and all the other “scandals” that the media has largely focused on in an effort to tear her down.

Her email “scandal” does not bother me. Yes, this is another yet unpopular opinion that many Hillary supporters hold. As secretary of state, Hillary kept the country safe. That is the only important thing to me, as it should be for others. Controversies are manufactured all the time during elections. I’m not saying that Hillary was completely in the right for her actions, but I am saying that Republicans were bound to find something to fixate on and turn into something bigger than it is. The only reason they haven’t found a scandal to associate with Bernie is because they simply don’t see him as a threat. I trust Hillary, I believe in Hillary, and I have stood by her through all the scandals she has faced through the years.

Hillary has also come under fire for her changing position on same-sex marriage. However, changing positions should not always be seen as a bad thing. President Obama did the exact same thing but is admired for it. In 2008, he was not in favor of gay marriage, and in 2015, he pledged his full support for it. Since when did following public opinion become such a bad thing? Obama listened to the current hot topic and went with his party. Would it be so bad if Hillary did the same? The only thing that really matters is Hillary’s current stance with issues. We need to realize that changing positions on topic is quite normal for any politician as issues change, grow and gain or lose support.

Hillary has had a tough campaign and it will only get tougher. As she goes head to head with fellow Democratic candidate Bernie Sanders, she continues to face sexism, accusations and scandals that won’t die down.  She will continue to be accused of being robotic, insensitive and cold. However, she will also continue fighting for the protection, prosperity and greatness of our country, just as she has for decades. I believe in Hillary because I believe that it takes a candidate with experience and a unique perspective to lead our country. I believe that Hillary is the only candidate who has the leadership and willpower to truly make changes that will positively affect our lives. For these reasons and many more, eight years later, I am still very Ready for Hillary.