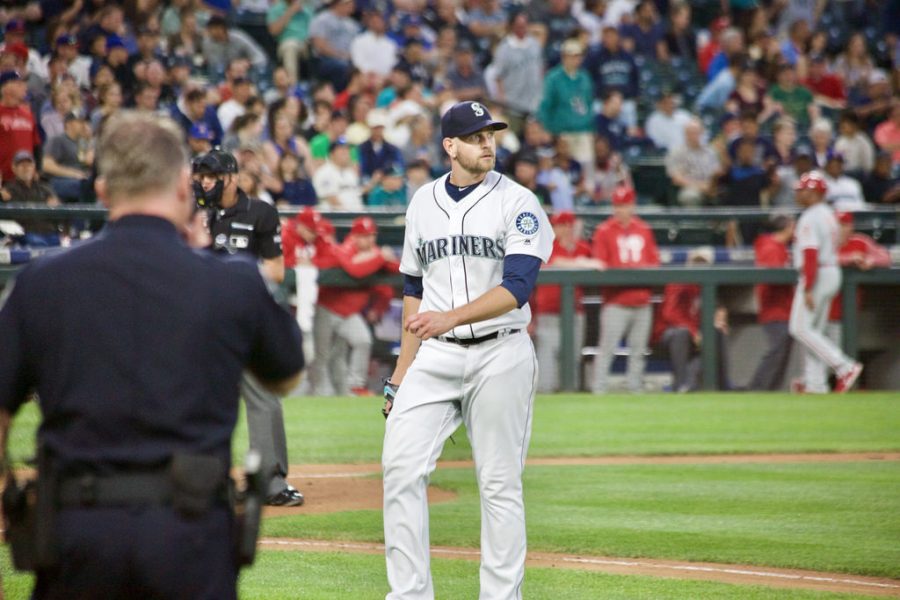 Mariners James Paxton has silently been one of the best starting pitchers in the past two years. He recently pitched a no hitter in his native Canada against Toronto. Photo courtesy by hj_west

Many great MLB teams this year have had disappointing seasons so far, such as the Washington Nationals LA Dodgers and Cleveland Indians. The Nationals were under .500 for most of April, the Dodgers are fourth in the NL West, and the Indians are in first place despite their 17-18 record. However, it’s important to also talk about other teams that may not be in the spotlight. The important question to consider here is: which teams are underrated this season?

The Seattle Mariners have been one of the  most disappointing teams in baseball after outfielder Ichiro Suzuki’s rookie of the year and MVP season. This year is much different than the last several seasons, though. They are just a game out of first place from the Houston Astros in the AL West, and their pitching has been good enough to win games. In two straight starts, pitcher James Paxton has been one of the best pitchers in the league, striking out 16, and then throwing a no hitter in his native country Canada. Closer Edwin Diaz has been one of the nastiest closers in the game, striking out 31 in 18 innings. The Dee Gordon experiment has worked out, as he’s thrown out two guys at the plate this year, and made two diving catches in Paxton’s no hitter. He has an  AL leading batting average, and his move him from second base to centerfield has worked out. Additionally, outfielder Mitch Haniger has been the most underrated player in the league, as he’s hit 10 home runs and hitting a .289 clip with 28 RBI. The Mariners should be given more attention.

In the NL, the first place Braves have surprised the entire MLB, but everyone should have seen this coming. Freddie Freeman is one of the best first basemen in the league, and a .947 OPS proveshis superstardom. The young number one prospect Ronald Acuna has given the Braves even more offense. In his first 50 at bats, he’s hit .320 hit three home runs, and his exit velocity is at a stunning 94.8 mph. The most surprising part of this team has been their pitching. As their ace Julio Teheran has been pretty average with a 3.65 ERA, pitcher Sean Newcomb has done well with a 3-1 record and a 2.88 ERA in his first seven starts this season. With closer Arodys Vizcaino in the back end, the Braves can do no wrong when they’re hot.

The comeback team who started slow last month has been the Washington Nationals. They have won nine of their last 10, and it’s all been because of four guys, shortstop Trea Turner, closer Sean Doolittle, starter Max Scherzer, and first baseman Matt Adams.  Turner has been your prototypical leadoff hitter being caught just once this year, and has a .339 batting average in his past 15 games. He’s been the catalyst for runs for the Nats and needs to be given a lot more attention in that lineup. You can give closer Sean Doolittle some props as one of the best relievers in the NL right now. He can pitch in the 7th 8th and 9th, and has a WHIP of 0.45 which leads all closers. He’s been a weapon for manager Davey Martinez in that bullpen. Starter Max Scherzer is on his way to another Cy Young award early in the season. He already broke a record with striking out 15 batters in the fewest innings. He leads the NL with 80 strikeouts has won six games already. You know when Scherzer is on the field, you’re going to get a win. Matt Adams has hit seven home runs in his last eight games, and each of those games, the Nationals have won. He is the hottest hitter in baseball right now and has not been given any attention. As outfielder Bryce Harper has been in a huge cold streak, Adams is able to back him up with those slugging numbers.

As always, baseball is a game of hot and cold streaks, but these three teams are legitimate teams that you have to watch out for. The Nationals always get press, but the Braves and Mariners need some attention and should be viewed as teams that could make the playoffs.