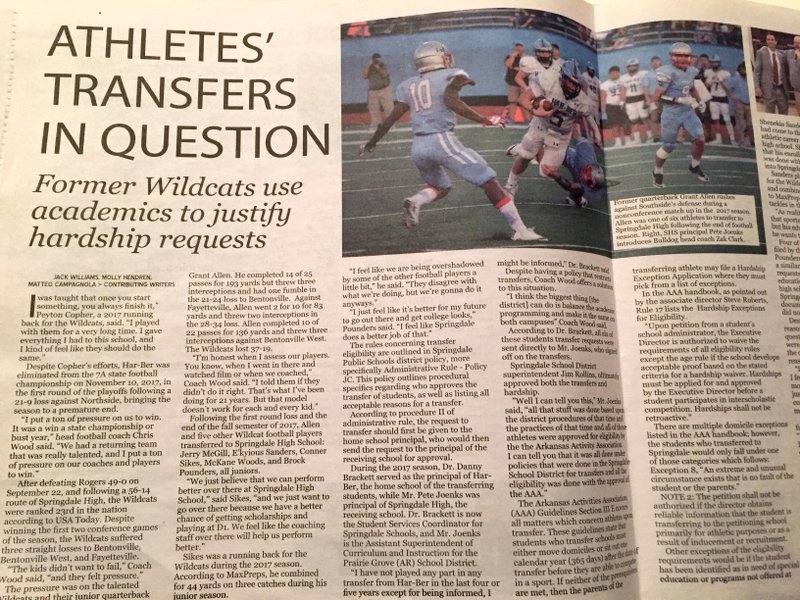 Photo courtesy of the Arkansas Democrat Gazette and the Har-Ber Herald.

The Har-Ber Herald published a revealing article which exposed illegal high school athlete transfers. The school demanded that the article be taken down, but they have now agreed to let it be published. Members of the Har-Ber Herald argued upset that their right to press has been restricted in their case for the piece’s public release.

Har-Ber High School in Springdale, Arkansas, about 150 miles northwest of Little Rock, has suspended its school newspaper after it covered unauthorized high school athlete transfers. The school newspaper, The Har-Ber Herald, embarked on a month-long investigation in which they uncovered five illegal transfers of football players to a nearby rival school.

Two of the transferred athletes noted that they were moved to have a better chance of playing football in college. These transfers violated school-district policy, which outlines the specifics regarding who approves a transfer of a student, in addition to listing all acceptable reasons for a transfer. This raises a serious question for both students, staff and readers alike: Who is in the wrong in this case?

After reviewing many reports and investigations, there is no doubt that the high school is in the wrong. Not only did Har-Ber High School engage in an illegal transfer, but they also silenced their student newspaper and ultimately, their student population for uncovering something extremely important.

In many cases, schools do have the right to restrict their school newspaper and limit what they can and cannot say. The school newspaper is a reflection of the school and is usually school sponsored. However, a spokesperson from the school district said that they played no role in suspending The Har-Ber Herald.

While this may be the case, wouldn’t silencing your school newspaper make the school and the entire district look that much more suspicious? How much more could they be hiding that they are afraid what will be uncovered? Have there been more illegal transfers of student athletes?

This is a very complicated issue because we all have First Amendment rights: the freedom of speech, assembly, religion and press. We all have the right to say, write and distribute credible information. These are the principles on which our country was founded.

What Har-Ber High School did really backfired: if they were to let the article stay published, the local community would have found out about the issue. Yes, ultimately, this issue would go to court and it would have turned into a legal battle. But now, the entire nation is paying attention and wondering why the high school would do something so secretive.

Within days of this news gaining national attention, Har-Ber High School allowed the Herald to repost the article about the illegal transfer of the five football players. Rick Schaeffer, a school district spokesperson, released a statement regarding this issue on December 4.

“After continued consideration of the legal landscape, the Springdale School District has concluded that the Har-Ber Herald articles may be reposted. This matter is complex, challenging and has merited thorough review. The social and emotional well-being of all students has been and continues to be a priority of the district…” Schaeffer said.