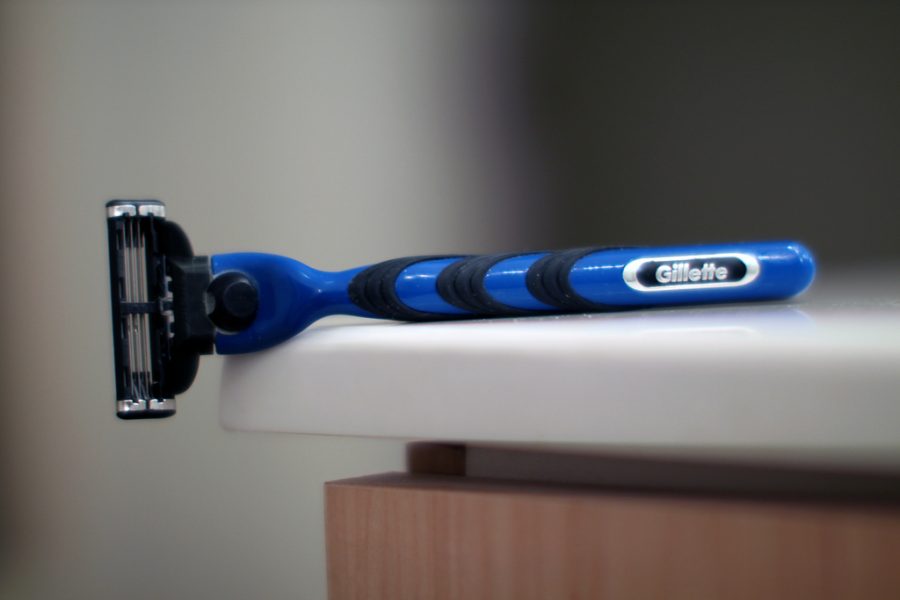 Gillette’s iconic razor sits on a bathroom counter waiting to be used. Gillette was founded in 1901 and it’s controversial commercial has stirred up controversy.

In just under two minutes, Gillette’s new advertisement “We Believe: The Best Men Can Be,” which is billed as a short film, manages to concisely articulate the problematic nature of generations of toxic masculinity in the United States. From children playing too rough with each other to the undermining of women in the workplace, the ad shows the negative effects of some men’s behavior in certain aspects of life, and offers simple, straightforward solutions for men to rally around.

With 27 million views on Youtube, 40 million shares on Twitter and vocal press coverage highlighting multiple angles of the issue, the impact of this marketing play cannot be understated. Just as well, partial disapproval opens a new dialogue centered on labeling the ad as unnecessary, and Gillette’s efforts as trivial. However, critics miss the point of the commercial altogether when they lambaste the position that’s taken and demand that “not all men” are built in such a fashion.

The solution Gillette proposes is the role of the upstander – a man who steps in to call out another for his negative actions. Critics feel that the ad generalizes males as if all are guilty of exhibiting these behaviors – which is an obvious falsehood that shouldn’t need any source to corroborate its truth. Widespread complacency, it should be noted, does allow for these unacceptable social patterns to persist. This is why it’s crucial, as Gillette showcases in this hallmark advertisement, that more men act as upstanders instead of passive bystanders.

For example, at 1:02 in the video, one man confronts another for catcalling a female passersby, telling him it’s “not cool.” Pause: this is a morally just action, correct?  At other points in the video, fathers are seen intervening when children are being bullied (which can certainly be agreed upon as a showing of exemplary parenting). The ad is not intended to simply shame the aggressors such as the catcaller or the bully, but to celebrate the upstanders who stand for the real people on the other side of these offenses. At the end of the day, it’s about them too: the children who hurt extensively for fear of bullying, women who may feel demeaned or disrespected by their male counterparts and others impacted by what can feel like reprehensible odds supported by age-old social tradition.

Gillette is bringing to light what has been on the cultural periphery for too long, and what others through the Me Too movement and the Women’s March have already started pushing into the mainstream. All people deserve respect, safety and happiness regardless of their gender, background or other identifying factors that may be perceived as “soft” or weak. This TV spot extolls that virtue and encourages viewers to integrate it into their lives as well – something with which all men should certainly look to identify.

Gillette’s new ad about toxic masculinity sends a nice message, to be sure. And that’s more than what can be said about most advertisements. However, that doesn’t mean that the ad is without its flaws.  In fact, many men find it offensive.

I wouldn’t say I find the ad offensive, but I do think it’s greatly exaggerated and, at times, greatly misinformed

To begin with, Gillette doesn’t seem to have a firm grasp on what toxic masculinity is. In one scene, two little boys are wrestling outside during a cookout — it appears to be good natured roughhousing. Numerous adult men lined up next to each other with their arms folded watch the boys wrestling and echo together, “boys will be boys, boys will be boys.” One of the adult men who puts a stop to the roughhousing says, “that’s not how we treat each other.” Certainly, boys shouldn’t pick physical fights. But how does two young boys roughhousing qualify as toxic masculinity? Indeed, there is research exploring the benefits roughhousing has for both boys and girls.

In a later scene, we see a father walking down the street with his son. The father sees a boy being chased by some bullies, and bravely steps in to protect the boy from being beaten up. It’s a moving scene, and because he’s an adult, he has little problem scaring away teenagers half his size. But what if it was another teenager who wanted to step in and help the kid being bullied? Chances are that these bullies would not have relented so easily. A physical fight may have ensued. The point is that in order to be brave and stand up to bullies, boys have to learn how to be strong and to stand up against adversity. It’s not enough just to be a kind person. Yet Gillette discourages boys from developing physicality earlier in their advertisement because supposedly it’s a sign of toxic masculinity. Gillette can’t have it both ways.  If they want boys to stand up to bullies, then they must allow boys to develop the qualities that will enable them to do so.

In another problematic scene, we see a woman walking down the street, when a man sees her and says “woah,” and is about to approach her. However, he is stopped by another man who says “bro, not cool, not cool.” I might be missing something, but is there a problem with a man saying hello to a woman who he is attracted to (or vice versa)? If the Gillette ad was implying that the man had negative intentions towards the woman, the ad certainly didn’t show it. Evidently, any man who approaches a woman is guilty of toxic masculinity.

In general, there is a conceit in the main premise of the ad that up until the Me Too movement, all men were somehow complicit in toxic masculinity.  In the words of the ad: “Finally, something changed.” Are we ready to dismiss the World War II generations as a bunch of Neanderthals?

So, while the Gillette ad may be well-meaning, it’s hardly the final word on the meaning of manhood.