Marvel’s superhero movies: the greatest cultural and entertainment revolution of our generation 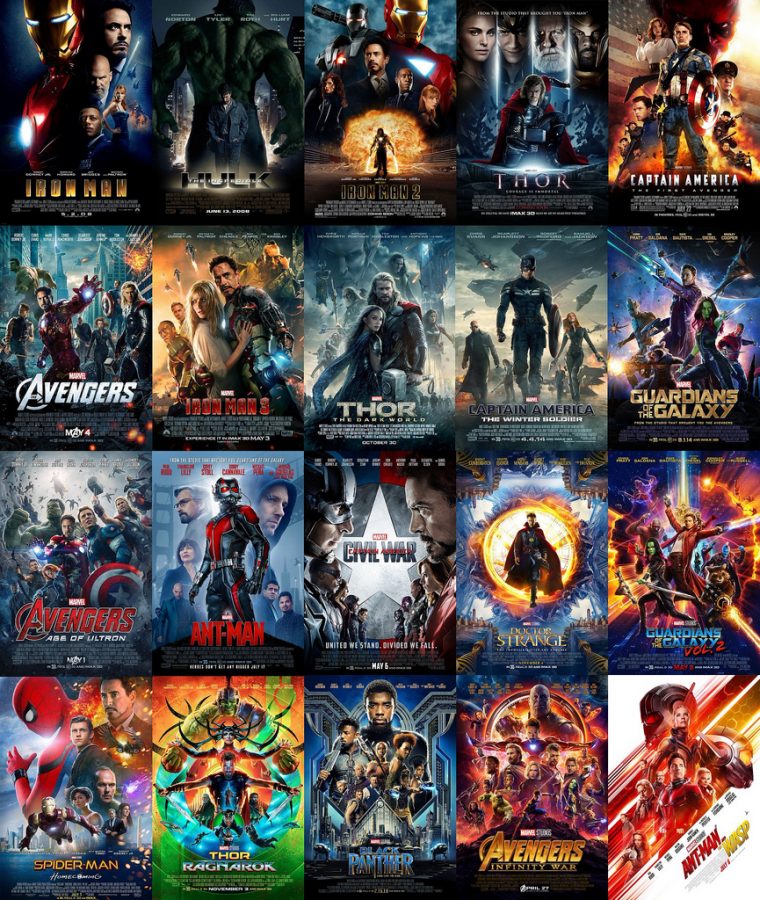 Every Marvel film, minus Captain Marvel and Avengers: Endgame, that has been released within the past decade is pictured. Numbering at 22 films and capping off at Endgame, the Marvel Cinematic Universe is the most lucrative film franchise of all time. Photo courtesy of Flickr.

Despite only being five years old at the time, I can remember the day I went to the movie theater to watch “Iron Man” for the first time with my dad. I knew nothing of superheroes aside from the classics such as Superman, Batman and Spiderman. However, with that first viewing of Robert Downey Jr. donning that red and gold armor, I became enamored with comic book culture and was transformed into a lifelong comic fan. Since then, I’ve held Marvel Studios in high esteem, and when comparing it to other films and franchises that have been created since, I can say with great confidence that Marvel’s superhero films has had one of the greatest impacts on this generation’s culture and entertainment.

It was 2008 when Jon Favreau, with the backing of the then struggling Marvel Studios, released “Iron Man”, starring Robert Downey Jr.: the first installment in the mega franchise that would come to be known as the Marvel Cinematic Universe (MCU). Without the success that “Iron Man” had, Marvel Studios would’ve lost the rights to ten of its now most profitable characters, and as a result, would’ve never become the colossal multi-billion dollar franchise it is today. After the cultural phenomenon spawned by the Golden Avenger himself, which created an entirely new generation of comic book fans, Marvel Studios, now owned by Disney after being bought in 2009, realized that not only had they caught lightning in a bottle, but they’d also created their very own thunderstorm.

With the release of “Captain America: The First Avenger” and “Thor”, actors Chris Evans and Chris Hemsworth both became overnight household names and money-making machines. “Iron Man 2”, while not as critically acclaimed as its predecessor, still saw great success at the box office. Following these came “The Avengers”, the culmination of four years of solo movies and world-building, and to say that this film made history would be an understatement. Against common belief, director Joss Whedon managed to not only create a phenomenal blockbuster, jam-packed with 11 starring actors and a fully fleshed out cast, but he also managed to set the groundwork for what would become a mega-franchise spanning a total of 22  films as of 2019. “The Avengers” broke 15 records upon release, and generated over $1.5 billion worldwide. As of 2012 with five films complete, Marvel Studios created a global cultural phenomenon that revitalized the stagnating comic book industry and irreversibly changed the film industry all with its very own entertainment renaissance.

When looking at the effect Marvel Studios and its multi-billion dollar brand has had on both our culture and entertainment, it’s hard to imagine what the world would be without it. “Iron Man” saw the birth of what can be called the era of superhero movies. “The Avengers” proved that making massive film universes could be explosively successful, and kickstarted Marvel Studios’ massive growth. “Black Panther” created a cultural phenomenon that empowered people of color worldwide and gave birth to a superhero that they could identify with. “Avengers: Infinity War” saw the largest release a superhero film has ever had, and generated the most anticipated opening weekend of all time, grossing $640.5 million globally. Despite “Avengers: Endgame” not being released until later this month, it has broken records already with the most ticket presales of all time, crashing almost every major ticket selling site.

Every film or show affiliated with Marvel has seen a profound effect on pop culture and entertainment worldwide. With just one brand, the advertisements we see on a daily basis, the toys we buy for children, the topics we discuss with friends and family and the movies we see on our days off have been influenced by Marvel and its stellar cast of superheroes. In the coming decades, it’s likely that these movies will still be discussed with avid fervor much like the classics of today. The expansion and pioneering of CGI and special effects like deaging used in these blockbuster hits has set the groundwork for the visual effects of the future as well. Unlike the viral challenges and yearly trends that have been spawned by social media that have an ephemeral effect on our culture, Marvel’s superhero films have held a resounding and long-lasting impact that no other form of entertainment can claim to have.

Click here to vote for your favorite MCU movie!