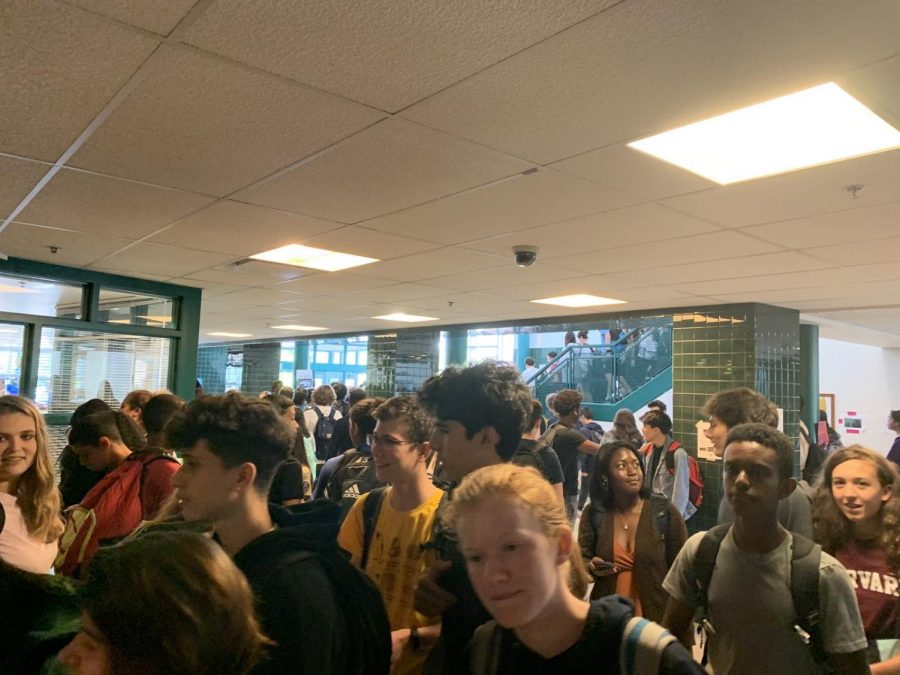 Students crowd the hallways in between periods during the school day. The student population has grown from around 2,400 to 2,700 students. Photo by Kiley Ring

The WJ school district is one of the most desirable ones in MCPS. WJ consistently ranks among the top schools in Montgomery County and has great reviews on Great Schools.  However, WJ’s great track record as well as its relatively new building actually disadvantages the student body. The school has been steadily growing, and this year the student population is around 2,700 students. This, paired with limited class rooms and class space, is extremely detrimental to students’ ability to actively learn and understand the material.

Overcrowding is inevitable. At some point, a school is just going to be too small in a constantly growing community. But classrooms with over 35 kids create a much bigger distraction for the students who need a quieter environment in order to be able to focus. There is so much more side whispering than in a smaller class where a teacher can quickly identify the source of the noise. It is so much easier to just talk with friends in huge classes, which will hurt students’ grades and test scores in the long run.

Being able to have the teacher’s attention is also huge for a lot of students’ success.  When there are so many people in a class, the teacher can only personally speak with a limited amount of students due to time constraints. So either the teacher has to spend more class time answering questions from more students or move on, which in turn will leave some students struggling and behind. If students do manage to get called on, the teacher might not have time to go as in depth in their answer as they might be able to in a smaller class.

The portables have been implanted as an effort to keep up with WJ’s growing population, but eventually the school is going to run out of space. Plus, the farther away  portables are placed, the farther students are going to have to walk, which can prove to be extremely inconvenient, especially in the winter.

The hallways are a big problem as well. It is not hard to tell WJ is overcrowded by taking one step into the hallways in between classes. It keeps students from getting to class as quickly as they may like and honestly just puts everyone in a bad mood. The new down only stairwells also make it inconvenient for students who have classes right near those stairwells who need to go up.

Obviously, there is no easy solution to overcrowding, but the county as well as whoever else is involved should try to resolve the issue as quickly as possible. WJ is not going to stop growing, and the sooner Woodward opens, the better. Classes are going to keep getting bigger and the quality of education is going to decrease as a result.