100th anniversary of the 19th amendment 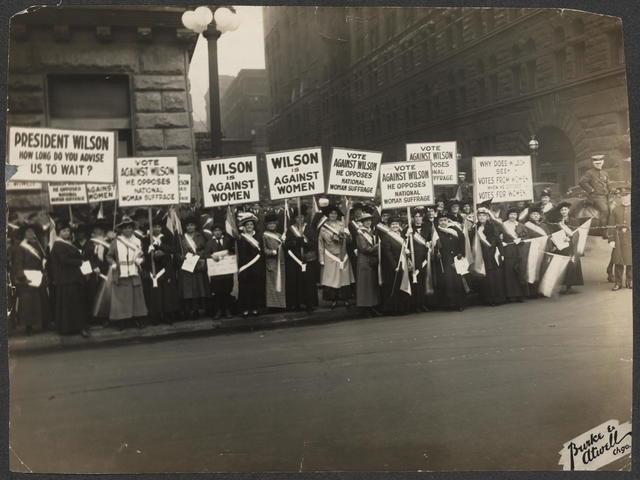 In 1916, Suffragists protest outside Woodrow Wilson's meeting in Chicago for the right for women to vote. The ratification of the 19th amendment took 72 years of non-violent protest.

“There will never be complete equality until women themselves help to make laws and elect lawmakers.”
― Susan B. Anthony

Eat, sleep, vote and repeat. Even though voting is a human right, it was unfortunately deprived of women for dozens of centuries. It wasn’t until hundreds of women were jailed for voting that more people started to realize that women deserve rights too. On August 26th, 1920, the 19th amendment was ratified in the United States of America. The suffragist movement took 72 years of fighting for women to gain the right to vote.

The Seneca Falls Convention was the first convention where women came together to discuss the crucial question, of “Why aren’t we voting?”. Organizations were created to push for women’s right to vote, such as Susan B. Anthony and Elizabeth Cady Stanton’s American Equal Rights Association, an organization dedicated to the suffrage movement for people of all genders and races. Despite the significant protest, Congress still passed the 14th amendment, which defined citizens and voters as only males. However, in 1870, the 15th amendment was passed, which made it possible for black males to vote. In 1878, the 19th amendment was introduced to Congress, and when it passed 41 years later, it was worded the same way as in 1878. Over 41 years, states began to adopt women’s suffrage. The Senate passed the 19th amendment in 1919, and Tennessee was the last state to ratify it on August 26th, 1920. Although it might be difficult to imagine, there were in fact women opposed to the movement. Wealthy women and women of status created organizations and called themselves “antis,” as in anti-suffragists. They even entered debates with suffragists to challenge them on the issue. Phyllis Schlafly distributed cookies and cupcakes to prevent states from voting for the Equal Rights Amendment. Luckily for women, after 48 years of discussions in Congress, the Equal Rights Amendment was finally ratified in 2020.

Every day, there is a stronger push for more rights for women. Women right now are one of the most active voting groups. The Ratification of the 19th amendment is one of the most important and famous non-violent protests in history. It included women everywhere who were united under the same goal: “We’re citizens too.”