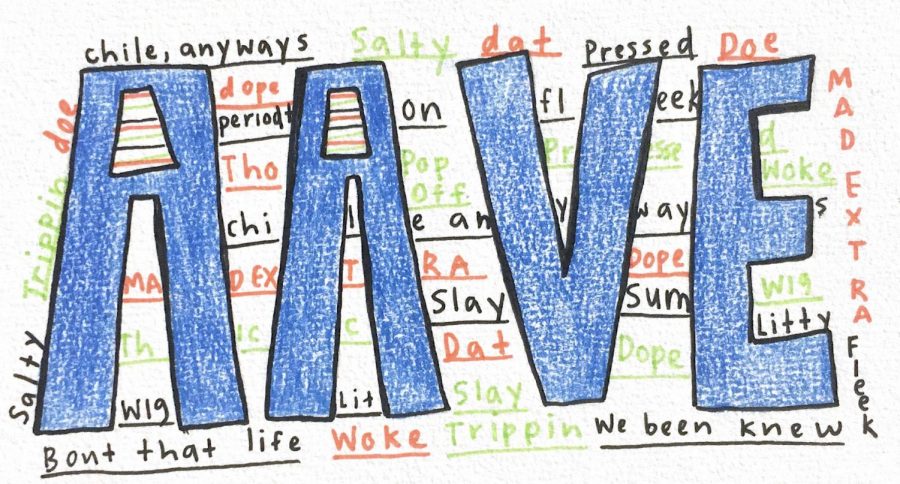 If you’re a regular social media user of any platform, specifically TikTok, you may have seen phrases like “whew chile,” “spill the tea” and “and I oop,” and words like “snatched,” “thicc” or “periodt.” These words and phrases are known as “Generation Z Slang,” but they really aren’t. These words are actually rooted in African American Vernacular English, otherwise known as AAVE or Black English. AAVE is a dialect of English, but it’s also been considered to be its own language. It’s had a lot of exposure in recent years, due to artists singing and rapping in AAVE. But is that a good thing? If it’s just a dialect/language why can’t everyone use it? What makes it so controversial?

Contrary to popular belief, AAVE didn’t start in the 21st Century. AAVE can be traced all the way back to slavery and has been used by Black people for centuries. There’s an enormous disconnect about whether some phrases are AAVE or just “Twitter slang.” In a now deleted video, Brittany Broski (also known as Kombucha Girl), mentioned a couple of AAVE phrases like “chile anyways” and “period sis” and said they were just “Internet Language.” This sparked a huge conversation on Twitter on what “Internet Lingo” or “Gen Z Lingo” actually is.

It’s really only considered cool when a non-Black person uses it and it’s usually used without correct pronunciation or without the right context. I’ve seen people pronouncing “chile” as “chi-lay” when it’s actually pronounced like “child” but without the “d”.
African American culture is now a massive part of society, and that’s why there is a huge gray area on what is acceptable to use and recreate. Black artists usually sing or rap in AAVE, and when people listen to those songs, they imitate it without knowing the significance of the words. When Beyonce released her song “Formation” in 2016, the phrases “I slay” and “I got hot sauce in my bag” went viral. Everyone was using them like they were new phrases, but they were common in the Black community.

But all of this doesn’t even touch the surface of the real problem: the lack of understanding about what AAVE really is. If we look at AAVE as just slang, then there isn’t a problem with people adopting and using it. But it’s so much more than that. It’s an actual dialect that people use to communicate. When a non-Black person uses it, with no regard to where and from whom it actually came, that’s just a form of cultural appropriation. I understand that like every other dialect or language, people do have access to it, but what non-Black people in Generation Z could do is at least learn the history behind it and respect AAVE before they use it.