The distinct difference of police responses between BLM and Jan 6 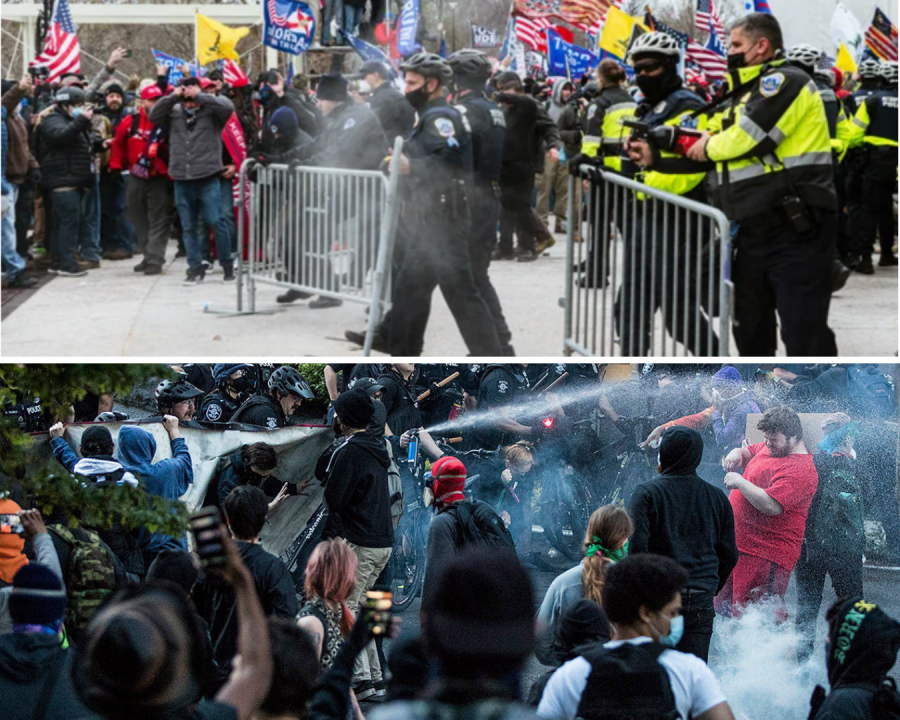 The difference of responses from the police to white supremacy vs. systemic racism became evident on Jan. 6. On the top, some police appeared to help rioters get into the Capitol, while on the bottom they tear-gassed BLM protesters.

Following the murder of George Floyd, there were weeks following of debates about police. Should they be defunded? Should the system be reformed? Should we blame cops or the system that employs them? Are there just a few bad apples?

After President Trump called for his terrorists to attack the nation’s Capitol, Republicans rushed to compare it to the Black Lives Matter protests. (Fun fact: Trump called for his rioters to be peaceful, after they had already broken in, and almost every member of Congress called for safe and peaceful protests during the BLM protests.)

It should go without saying that there’s a huge difference between the domestic terrorist attack that happened on Jan. 6 and the Black Lives Matter protests that took place last summer. BLM protesters were taking a stand against police brutality and systemic racism, while Trump’s supporters were rioting because they lost an election.

There was also a huge difference in the police response.

When BLM protests happened in DC, there were 2,000 national guard members deployed to protect federal buildings, even though BLM protestors never threatened an attack on the government. When Trump’s terrorists marched in DC, they had flags with them that symbolized hate and bigotry, like the Gadsden and confederate flags.

Prior to the attack, there were warning signs: Many people on social media planned to break into the Capitol building. You would think that would have been enough to have enough to take precautions for the congressional electoral vote confirmation. Larry Hogan claimed that his request to send the Maryland National Guard to protect Capitol Hill was repeatedly denied by the Department of Defense. Since D.C. isn’t a state, only the Pentagon has the authority to deploy the D.C. Guard. Many D.C. officials have expressed concern on why it took so long for the Pentagon to deploy them. There are still investigations on whether there were inside sources that helped the attackers, but early evidence indicates there were.

The police only started tear gassing the rioters after they were already inside, while they tear gassed peaceful protestors in the streets in the name of safety. Police were also “detaining” protestors outside the House chamber. if these people were Black, they would have been tased, arrested and even shot. If these people were Muslims, they would have been sniped from the top of buildings.

There are videos showing police taking selfies with the terrorists, helping them down the stairs and even opening the gates to allow them in.

Over 90% of BLM protests have been peaceful. Even if you blame the rest on the protestors, not the police for inciting violence first, none of these protests ever came close to causing an insurrection and the Vice President of the United States to be evacuated because his life was under attack. Not once have BLM protests caused congresspeople to be rushed out of the Capitol by Secret Service members.

And you would think the police response would be 100 times more strict than at the BLM protests. Well, that wasn’t the case. These insurrectionists were just escorted out and allowed to go home. Only later did the FBI open an investigation, so far arresting 140.

What happened on Jan. 6 was the epitome of white supremacy, an ideology that has been back in the mainstream again within the presidency of Donald Trump. The same people who were screaming Blue Lives Matter as a response to Black Lives Matter were hitting police with American flag poles during the terrorist attack. Which just shows that it isn’t about “standing with the police,” it is being anti-Black and upholding white supremacy.