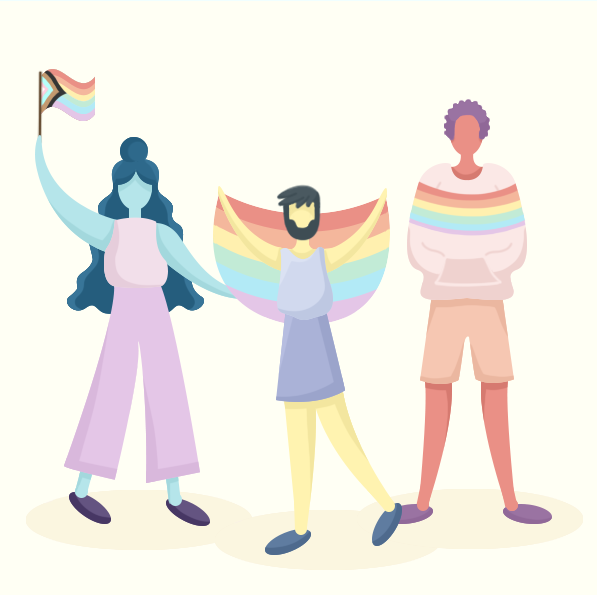 As I lay in bed the other day, I was engulfed by a cloud of adoration — I missed my girlfriend. So I did what any other Gen Z teen would do: I posted a picture of my significant other on my Instagram account. But my post wasn’t swiped under the rug. My sister and close friends immediately asked if this was my official “coming out.” I rejected their assumption with a sigh, informing them that I was simply posting a picture of my girlfriend. Nothing more, nothing less.
As Wikipedia defines it, “coming out” is “a metaphor for LGBT people’s self-disclosure of their sexual orientation or of their gender identity.” (For the purposes of this article, I will be concentrating on coming out as a means to disclose sexual orientation.) Coming out is considered a bold and daring proclamation of one’s attraction to a specific category of human. Yet the act is restricted to one sector of people, the LGBT+ community, which is marginalizing in itself. By making coming out the standard for all LGBT+ people, you are forcing us into a closet we didn’t ask to be in.
As long as we, as a society, agree that sexual orientation is applicable to each and every individual, why only make declaring our sexuality a ritual for the LGBT+ community? The answer is simple: because this community is considered a deviation from the norm; this community struggles to be understood. The labels that we are given — gay, queer, etc. — are labels that allow for our identity to be easily digested by the “normal” sector of people. That is, until the labels are taken too far and middle-aged people struggle to comprehend the meaning of bisexuality or pansexuality.
Straight culture, also known as the default, does not entail this formal departure from the closet — the closet doesn’t even exist. Since birth, we are assumed to be in the living room, where all are heterosexual and unaware of what’s behind the door. Among this population, one would simply say, “I have a girlfriend” or “I have a boyfriend,” instead of coming out as heterosexual. This announcement is a simple check on the box next to “straight,” pleasantly confirming society’s assumption.
Although I do not check that box, I wanted my entrance into the “dating world” to mimic that of a straight person’s. So, instead of telling my mom that I was bisexual or demisexual or pansexual, I told her I was in a relationship with a girl. I took the straight route to a queer destination.
If coming out were a requirement for all, five years ago I would have come out as straight. Then I might’ve decided I’m actually bisexual. Then maybe pansexual. Sexuality is not a box that requires a label; it is an ever-changing construct that bends with experience, realizations and societal norms. While many progressives are quick to hop on the “sexuality is a spectrum” bandwagon, they often fail to recognize that a spectrum implies fluidity and constant motion.
I acknowledge the privilege that allows me to have such “radical” thoughts. I live in Bethesda, an area in which progressive ideals are more often uplifted than suppressed. My parents welcome my girlfriend into our home with open arms. Because of this, there was less formality and gravity surrounding my decision to be with a person of the same sex.
Still, this manner of “coming out” — doing so without a label — is a step towards deconstructing the intangible barrier of sexuality dividing our population. We aren’t defined by our labels, we are merely people with (or without) attractions to other people. In that sense, we are all the same: just people who feel things. We should all be granted the opportunity to announce our sexuality as we please — not cater to the comfort of our audiences. There is an unnecessary weight that rests on the shoulders of my community members, and that is the pressure to stamp a label onto our metaphorical foreheads.
As we progress as a country, the act of coming out will hopefully lose formality and become taboo. The lack of a label shouldn’t make a person any less a part of the LGBT+ community. The ability to be in public with the partner of their choice is still deserving of celebration. So I will continue to post pictures of my girlfriend while refusing to provide a label for my following to digest.