The truth of professional horse racing 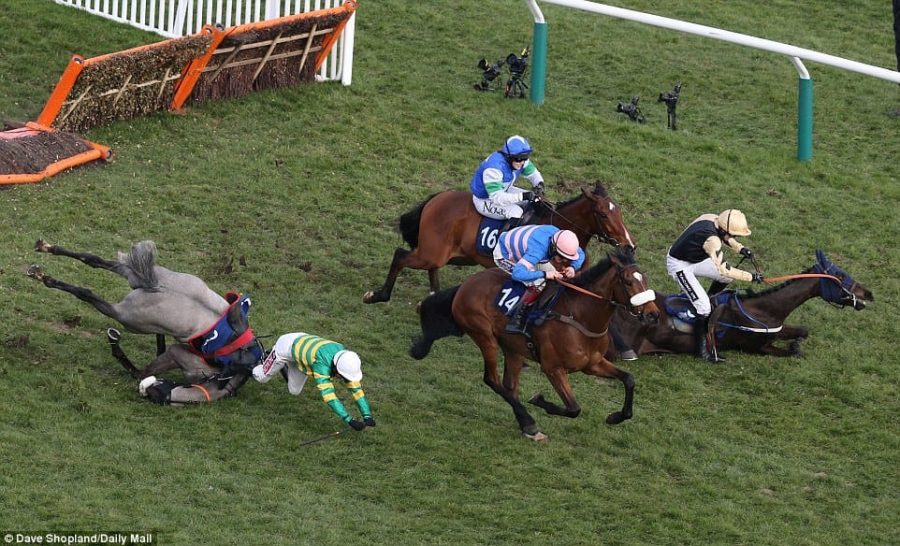 It has been a little over a month since the 147th Kentucky Derby race. Medina Spirit pulled the lead right from the beginning. He held it for a while, until the last stretch of the race. It was very close, but Medina Spirit was able to pull away and he took first place proudly. However, shortly after the Kentucky Derby, Medina Spirit’s blood test results for betamethasone (an illegal drug) came back as positive. And now a second test has confirmed that drugs were injected into Medina Spirit. While this is bad enough, there is a bigger question to consider: Is horse racing a moral sport?

Many Americans across the country love to watch horse racing. A lot of people win tons of money on horse racing bets. Horse racing events like the Kentucky Derby seem fun when you watch it every year. It’s exhilarating for many people to watch horses racing their hearts out. But there is way more behind horse racing than the two-minute races people watch on the television.

Many horses actually suffer and die due to horse racing. Between 700 and 800 horses die a year from racing. And from 2010-2019, 237 horse racing deaths occurred from the Kentucky Derby. This includes horses dying during the races, dying during training or even the trainer inflicting violence on the horse.

According to People for the Ethical Treatment of Animals (PETA), horses begin training and racing when their skeletal systems are still developing. This can cause major bone damage. There have been many reported horse injuries related to racing, such as broken bones, fractured bones, chipped bones, and bleeding in the lungs. And when horses break their legs, they have to be put down.

Some trainers put their horses on drugs so that the horse does not feel any pain in its legs. This enables the horse to run faster. But it also puts too much pressure on the horse’s legs and thereby increases the risk of broken bones. When a horse’s leg breaks, it can’t be cured. A broken leg for a horse leads to many different health problems, which is why horses are usually put down.
Racing is often forced upon the horse by their trainer, which is not healthy at all. Some horse trainers can go to such extremes just to make their horse run faster. As we’ve seen on television, many trainers whip their horses during races. It has also been reported that horses have been shocked to run faster by their trainers. In 2013, PETA reported that some trainers and jockeys admitted to using illegal electric shock devices on their horses. This causes serious damage to the horse mentally and physically. Imagine someone sending electric shocks through your body so you could run faster.

It’s really hard to believe that any of the horses you see during the Kentucky Derby are enjoying themselves. We can never exactly know what goes on inside a horse’s head. However, we can interpret it based on the horse’s behavior. Horses are probably happiest when they are running on their own in a field. Horses also probably enjoy running with people on them in non-professional races, where the horse is not being whipped and is not being trained to the point of exhaustion. But when humans race horses in professional competitions, the horses continue to run faster out of fear. That is the whole point of the whips and the reported illegal shocks. They are devices used to force horses to run.
One of the saddest things about horse racing is how horses don’t even have a say in how they are being treated. If a horse doesn’t want to run, they still must. The horses don’t even know when trainers inject illegal drugs into them or that they are cheating. This goes back to the incident with Bob Baffert and his horse, Medina Spirit. What does this say about human nature?

It shows that humans will treat other creatures terribly so that they can be amused. When a horse wins a race, what do the humans get? They get a lot of money and ribbons to hang on their wall. And what does the horse get? Nothing but pain and sometimes death. The horse doesn’t even know that they won a race.