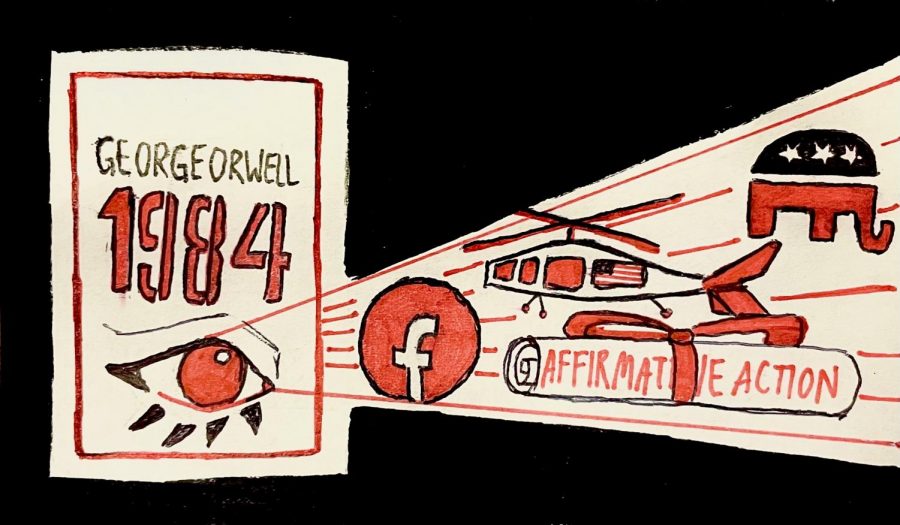 In WJ’s English curriculum, we read many great old books. Some of these books, though written 50 to even hundred years ago, are still very significant to this day. One book in particular that connects to our present day is 1984, written by George Orwell in 1949. Many people most likely read this book in either ninth or tenth grade. It’s a dystopian novel about a powerful, corrupt government taking control of the people, manipulating them and constantly watching them. It’s a book that deserves especially close reading today for the way in which it captures many worrisome current trends.

One of the themes in 1984 concerns the rewriting of history. Big Brother and the Party would rewrite history in order to maintain power over the people. There are many examples of this today in politics. For instance, Donald Trump claimed that more people attended his inaugural address in D.C. than attended President Barack Obama’s inaugural. This was a patently false statement, but Trump wanted to make himself look better and more powerful. Another example is when Trump claimed that the 2020 election was stolen in order to keep his followers in his thrall. Similarly, President Joe Biden attempted to rewrite history for political purposes by claiming that the U.S withdrawal from Afghanistan was a great success. This was also patently false, but by controlling the “narrative” Biden sought to bolster his presidency.

In 1984, Big Brother and the Party developed the idea of “newspeak” to manipulate how the people thought. Newspeak was a language that allowed the Party to control the people’s minds. It made it harder for the people to have their own beliefs and knowledge. As a result, newspeak would control how the people thought. An example of this today is when some people refer to the federal bureaucracy as the “deep state.” Another current example is the replacing of the word equality with equity. In both cases, the change of terms is intended to manipulate public opinion for political purposes and alter how we perceive things in the world.

Orwell’s novel also introduced the idea of “thought crime” — which involves believing in something other than whatever the party line happens to be. Liz Cheney, a Republican House member, has been ostracized from her party simply for being critical of Trump. Cancel culture is another example of this in our day. For example, Dorian Abbot, a renowned scientist, was supposed to give a lecture at MIT titled “Climate and the potential for life on other planets.” However, MIT rescinded their invitation to Abbot when they learned that he opposed affirmative action. In defense of their action, MIT declared, “Words matter and have consequences.” Cheney and Abbot were both found guilty of thought crimes.

Big Brother and the Party also devised a monitoring system, known as the “telescreen,” so that they could watch the people constantly. The telescreens in 1984 collected all sorts of information and data about the people’s whereabouts, personalities, etc. Social media sites, like Facebook, are today’s version of the telescreen. They gather information about their users. The digital technology companies then use the information to manipulate its users by constantly sending ads they might like. We’re lucky the government does not use this information. But, it’s still dangerous, as these social media sites have access to our privacy. It’s scary.

In 1984, a book written 72 years ago, Orwell presents our society with an important warning about the loss of freedom and democracy. It is crucial that Americans today heed Orwell’s warning. It may sound silly that a book written 72 years ago could predict the future, but the truth is that Orwell’s dystopia has become, in certain ways, a reality in our own day.
It is our responsibility, as Americans, to learn from great books of literature, like 1984. Orwell’s 1984 depicts a ruined world — but by learning from Orwell, we can perhaps prevent this from happening in our present day.