Widening I-270 isn’t the answer 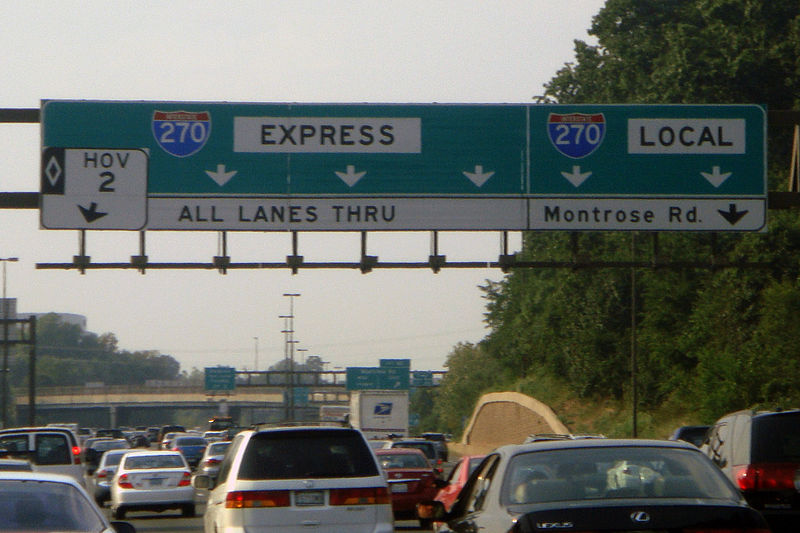 I-270 just north of its intersection with I-495. The widening plan would widen part of I-270 towards its southern end.

In the United States, wide highways are a fixture of urban and suburban communities. In many ways, DC and Montgomery County is an exception, where great political effort is placed to ensure that communities are walkable and transit is accessible. However, Governor Hogan’s proposal to widen I-270 is a regressive idea that will move the region backward on equity, climate, and transportation.

Montgomery County has many bold plans to combat the ‘car-centric’ nature of our transportation infrastructure. These plans include a countywide bus rapid transit system (buses with their own lanes), the construction of the purple line, and Vision 2030 which aims to eliminate traffic deaths.

Making Montgomery County and the DC region as a whole less ‘car-centric’ is also critical to combating climate change. Transportation contributes the most to carbon emissions by sector in the United States according to the EPA. Additionally, according to Bill Pugh from the Coalition for Smarter Growth, the DC region will be unable to meet its emissions targets unless car dependence is reduced. It is also important to consider that Montgomery County has a bold climate target: reducing emissions by 80% by 2027.

Given all of this, transportation policy in the DC region should be focused on making alternative modes of transportation more appealing. This proposal to widen I-270 is directly the opposite. According to the Sierra Club, the plan will increase Maryland’s greenhouse gas emissions and would be in contradiction with the state’s emissions target.

Looking beyond climate change, we must also consider that widening highways doesn’t work. This has been well documented throughout the United States. To put the concept simply, when a highway is widened, congestion initially goes down, then more people start using the roadway and the end result is the congestion returning but with more vehicles on the road.

It is also important to consider that the project will cost billions. While the state is not paying the whole sum up-front, the public private partnership means that a private company called Transurban will get toll revenue for decades after the project is completed. The state has a limited amount of resources to spend on transportation, and the fact that they would spend so much on a project that moves our region backward is ridiculous.

In addition, there are numerous other projects that the State could work on to improve transportation in this region and around the state. They could be making more progress toward the construction of the Red Line, providing a critical new link to the Baltimore transit system. They could be funding the Corridor Cities Transitway which would provide rapid transit to places like Clarksburg. Instead, the state has canceled or cut support for these projects. The choice to use funds to widen highways instead of improving transit is clear.

Widening I-270 also means that inequities in Maryland will be exacerbated. This is a choice to use funds to expand an already very wide highway in an affluent, mostly white area. Funding should instead go towards ensuring minority and low-income communities have access to quality transportation. There is a cost when the state chooses to do this; a significant economic cost to those communities when we choose to deny them quality public transportation.

Looking beyond the transportation aspect, the highway widening proposal will require tearing down many places lining the highway. Neighborhoods near the highway will be torn up, schools including some in the WJ cluster will be removed, and even the US Navy has come out in opposition to the project due to it taking some of the Navy’s land.