Point/Counterpoint: Should the SROs be reinstated? 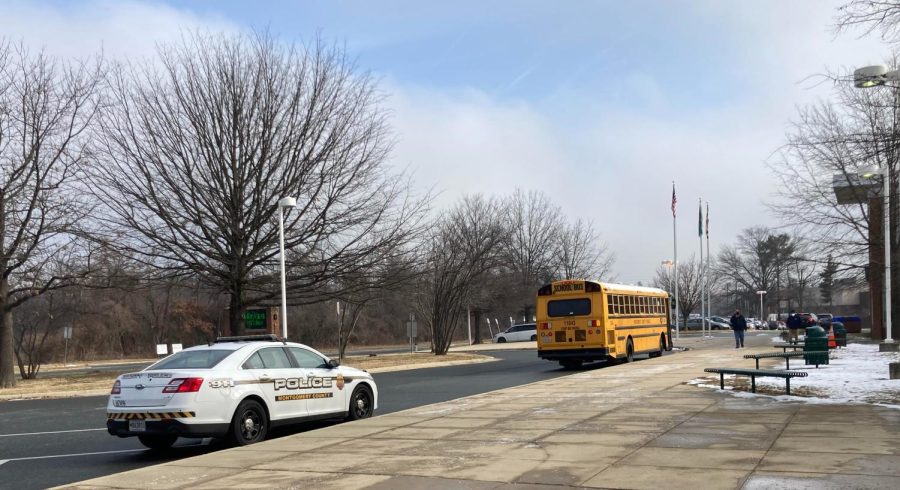 Former WJ SRO Shate Jackson was temporarily placed back in school following the Magruder HS shooting. MCPS leaders are currently in talks about expanding the Community Engagement Officer program which would place police officers back in schools.

On Friday, Jan. 21, 17 year-old Steven Alston allegedly shot a 15 year-old student with a ghost gun at Magruder High School. The two had an altercation in one of the bathrooms when Alston pointed the gun at the student’s head, resulting in the student pushing the gun away and Alston shooting him. Once the student was found by school security, the community engagement officer arrived at the school within seven minutes. The school was put into lockdown until a SWAT team found him in a classroom with his peers.

Magruder’s students and staff would have been much safer if there was an SRO in the building when the incident was reported. During the seven minutes when an officer was on their way to the school, there could have been many more casualties. We were lucky that Alston decided to not use his remaining eight rounds in the time it took to lockdown the school.

The program that is currently in place, using community engagement officers, is not sufficient to ensure schools’ safety. At the Magruder shooting, it was one of these officers that was seven minutes away when the incident was reported. I am certain that an SRO officer in the building would have been at the scene much sooner.

It is also important to point out that without an SRO, Alston didn’t even have to risk being searched when entering the building. The community engagement officer program only goes into effect after a crime has been committed, risking more damage being afflicted while the officer is on their way from a nearby location. MCPS’s current solution to schools’ safety is reactive to crime, while the previous SRO program worked to prevent violence before it occurred.

Counterpoint: SRO’s from a POC’s perspective

Early morning rise and shine. Some people shower, most brush their teeth. A few eat a hearty breakfast. Most students prepare themselves for up to seven long periods of learning in school.

However, there are some things students should not have to prepare for: feeling unsafe in schools due to a police presence. Now, if you are a person of color, you have to have the “talk”. No, not the talk of the birds and the bees; the talk that deals with what to do if you get stopped by the red and blue.

Those talks, as sad as they may be, are necessary but shouldn’t be needed for students. It shouldn’t be a conversation for students who are supposed to be in a “safe space” for learning. Due to recent violent events at Magruder High School, there is a rejuvenated push and support of having School Resource Officers (SROs) in schools again, including WJ. Some feel that schools are safer for students and faculty knowing there is someone who can possibly bring an end to violence if it should happen. My question is, do we all truly feel safe with them here? Can we trust them to keep to the service and protection of students, and not take “the law” into their own hands? Can we trust adding another layer of possible controversy in school? Given the previous track record of incidents involving SROs, it’s a bad idea.

According to an interview conducted by The Washington Post in 2016, a fight broke out in an elementary school in Dayton, Ohio. Nine year old Amir Jabar had to watch as his fellow classmate was pinned to the floor and arrested. Remember, this is a nine year old being handled this way. There was a viral video in 2019 in which an SRO violently handled an 11 year old in New Mexico. Her arms became contorted as SRO Zachary Christensen forced the student’s hands behind her back. Her crimes included “standing on the bus, taking too many milks at the school cafeteria, and picking at a sign taped on a door,” P.R. Lockhard from Vox.com wrote. If that is done to a literal child, imagine the force used on a high school student.

In both of these instances, the student and SRO’s relationship is being handled so poorly. This is to the point where there seems to be less protection than policing. Another crucial detail is that these students are people of color. These combinations of possible violence for minor infractions, along with the feeling of constantly being watched/having a target on your back do not make me feel safe in any school where there’s a police officer. I am not the only one to share this sentiment. After speaking with a number of WJ students, a majority being fellow students of color, the general consensus is that having officers make students feel more anxious and uncomfortable than safe. In an environment like school where anxiety and stress run rampant, why add gasoline to an already rampant fire in hope of a hypothetical savior.  Marjory Stoneman Douglas tragically had a shooting in 2018. An SRO was already in the school but could not engage without the jurisdiction of the police. After the shooting, officers were deployed to stand guard with AR15’s in the school triggering flashbacks, trauma. Again, less protecting than policing. In conclusion, being a student is difficult. Being a student of color provides its own unique challenges. There is no need for an addition that provides more potential conflict than a solution. We need counseling, not policing.