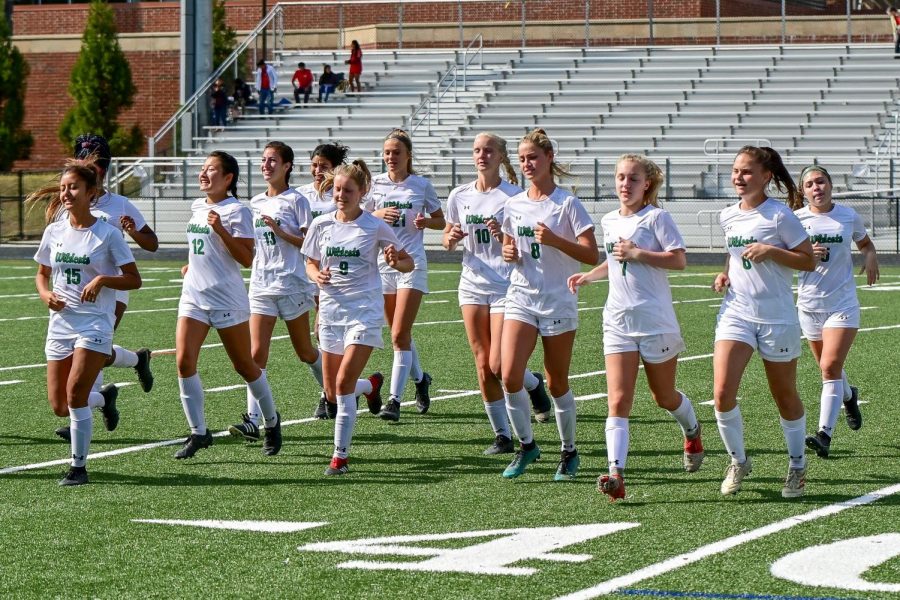 The team warms up before a game from the successful regular season. The season came to a close after a second round loss to Whitman in the playoffs.

After a tough loss to Montgomery County rival Churchill in the playoffs last year, the girls’ varsity soccer team was looking for redemption in 2019.

The team achieved that and more. They defeated Churchill 2-0 at home. And, with stout defense and powerful offense, they assembled another double-digit win campaign.

On a near freezing Thursday night that would mark the end of the regular season, the team’s experienced seniors and promising underclassmen closed with a bang. The girls dominated Blake, with a crushing 5-0 victory.

In many ways, this win was a perfect reflection of their determined performances throughout season.

With 10 seniors, the team was built for resilience. Though the team started a little shaky with a 2-0 loss to Good Counsel, they recovered quickly. They proceeded to go on a four-game win streak, proving that they could earn they way to the top of the leaderboards.

“Team chemistry for sure! Everyone has gotten along so well and we have bonded on and off the field which has allowed us to play to our highest potential” said senior varsity captain Jacqui Moss when asked about what she thought was the secret to the team’s success this season.

After a couple of other bumps in the road — losses to BCC and Whitman — the team got back on track and finished out the season without losing a game, amassing 15 goals along the way.

Entering the playoffs, the team is riding momentum and excited for upcoming challenges.

“Expectations are that we’ll give our 100% in everything and beat them [Whitman] to continue our path to winning states” said junior Nicole Caceres.

No matter how the playoffs unfold, the team has had another great season. They were able to beat the team that ended their run last year, and had more shutouts than you can count on one hand. Not only did the seniors get to round out their last final season with a strong record, but they have also paved the way for the underclassmen to carry on their legacy.