Athlete of The Issue: Deep dive into freshman swimmer’s success 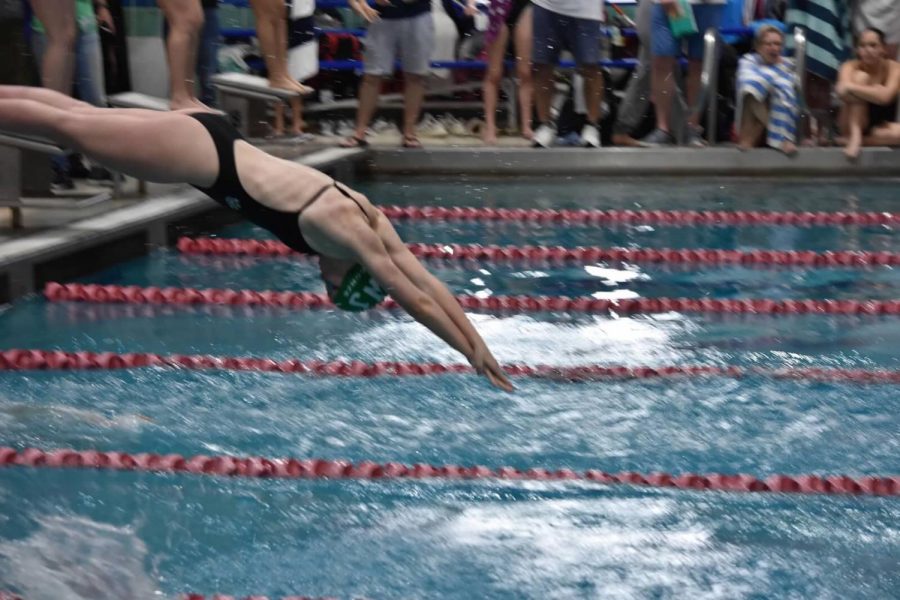 Freshman Marren Conze is pictured diving in at one of her meets. Strong underclassmen have always played a key role in the success of the team.

At just 15, freshman swimmer Maren Conze is already dominating in the pool, having recently won the 500 meter freestyle competition at this year’s Washington Metropolitan Interscholastic Swimming and Diving Championships (Metros).

Q: How long have you been swimming? Have you played other sports?
A: I’ve been swimming competitively since I was 10. Before that I played soccer but eventually quit because of swimming.

Q: What gravitated you toward swimming?
A: I think the number one reason I got into swimming was because of MCSL in the summer. It really helped me find my love and passion for swimming. But even before that I have always been a water person, I loved going to the beach and the pool. I always thought swimming was fun, so when I turned 10 I wanted a challenge and decided to join a competitive club team (NCAP).

Q: What competitions do you excel in? What about them allows you to perform at such a high level?
A: Outside of high school swimming I’m the best at 500 free and 200 backstroke. In the 500 freestyle I’m able to hold a pace really well, it’s just the way I swim. The 200 backstroke is one of the hardest events, so dropping time in it is very different than any other event. The sensation I get while participating in it is different than any other competition which really motivates me to do well.

Q: How often do you swim?
A: Seven times a week, for two hours. I also go to the gym for an hour twice a week.

Q: Who inspires you the most?
A: My role model is Becca Meyers, a paralympian who is blind and deaf. She trains with us and is a really hard worker. She is always positive and she is always inspiring me to work harder in the pool.

Q: How has Becca impacted you on a personal and athletic level?
A: She’s helped me realize that there are many challenges in life and that the pool is a place you can go to be your best and not think about your limitations.

Q: How long have you known Becca? Where do you think you would be without her influence?
A: I’ve known Becca for about two years, and she’s been training with us for about three. Without her I would take things more for granted, as her disability has shown me some of the hard challenges people all over the world face.

Q: How have the upperclassman helped you this season?
A: The upperclassmen at WJ were very welcoming and made me feel at home. The seniors on my club team have also been very accepting of me, treating me as if I was also an upperclassman. This has been super helpful in my development, as I’ve always felt a strong support from my teammates.

Q: What are your goals for the next three and beyond? Do you have dreams of swimming in college and/or the olympics?
A: For the next three years I’m working to get a scholarship for swimming. As for the Olympics, just about every swimmer has Olympic dreams – it’s just a matter of making it. I’m probably not going to make the Olympics this year, but I am working toward making some cuts and qualifying for Olympic trials.

Conze’s success at such a young age not only acts as an inspiration to WJ’s own growing athletes, but also drives home the idea that hard work pays off. Equipped with a great work ethic and surrounded by an incredibly supportive cast of peers, the future is bright for freshman phenom Maren Conze.