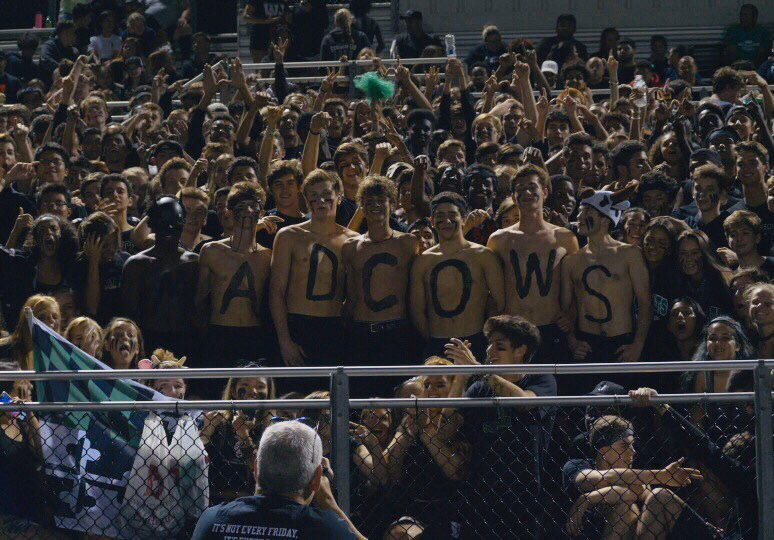 WJ students packed the senior section on September 27, 2019 in a blackout vs fierce rivals BCC. The game ended in a convincing 42-7 win for the Wildcats.

Tensions between students of both Walter Johnson and Bethesda-Chevy Chase High School have recently skyrocketed, birthing a new and somewhat chaotic rivalry. With WJ and B-CC making up two of the three Bethesda high schools, there’s always been something of a rivalry\; however, it’s reached new heights in recent years. So why can’t the Wildcats and Barons get along? Let’s take a look at what’s transpired over the last couple of school years to propel this conflict.

The first major incident between the two schools dates back to late 2017, in what started as a routine match-up between their respective hockey teams. During the game, a massive fight broke out in the stands, resulting in the arrival of six police officers to the Cabin John Ice Rink, although no injuries were reported and no one was arrested. Walter Johnson won that game 4-1.

One day after the game, popular social media account and Boston-based sports blog BarstoolSports posted a short clip of the fight, prompting online feuds and the B-CC hockey team’s Twitter account to repost the video. The team’s account has since taken the post down.

After having been thrashed 75-51 by B-CC a year prior, the WJ boys’ varsity basketball team marched into Baron territory with a vengeance, edging out a two point victory. The atmosphere of the game was electric, with the stadium absolutely packed to the brim with students of both schools. While nothing super significant occurred, WJ’s victory established the teams as competitive and set the stage for future matchups.

Knowing a win would ensure a playoff game against the first-seeded Wildcats, B-CC students began to chant “we want WJ” in the closing seconds of their school’s 74-71 play-off victory over Einstein. News of these chants quickly spread to the WJ boys’ basketball team, and the entire school shortly after. This garnered much anticipation for the matchup between the school’s fan bases and gave both teams some extra motivation. For B-CC, the goal was to upset their number one-seeded opponent, while the Wildcats were looking to defend their pride and number one seed.

In a game that would decide one of the team’s seasons, the B-CC boys’ basketball team traveled to WJ to take on the Wildcats. The stands were filled to capacity, with a designated section specifically given to the traveling Barons. WJ emerged victorious in a thrilling game that saw B-CC hit an improbable last second three point shot to extend the game into overtime. In the closing moments of their victory, Walter Johnson students got revenge on B-CC for their taunts days prior, chanting the chorus of Steam’s iconic song “Na Na Hey Hey Kiss Him Goodbye”.

To avoid any further conflict at the end of the game, WJ administration didn’t allow home fans to leave the stadium until the away section had fully cleared out.

The WJ football team destroyed B-CC’s squad 42-7 in a game that saw the biggest fan turnout in Walter Johnson history. The stadium was a sea of black, packing a student section per grade.
Shortly afterwards, an unofficial WJ fan page posted a slideshow of pictures from the football game against Bethesda-Chevy Chase, with a caption that was sure to spice things up. While nothing profane or inappropriate was said in the caption, it ignited a battle between the schools in the comment section.

On the morning of January 14, WJ students awoke to find that their senior shed had been spray painted, presumably by B-CC students. The paint covered much of the shed, reading “roll Barons” and “Sadcows”. The senior shed is repainted on a yearly basis, with members of the rising senior class putting their names on it. The vandalization came in anticipation of the B-CC vs WJ basketball game the following Friday.

Immediately after BCC students’ alleged vandalization of WJ’s shed, students, believed to be from WJ, fired back by spray painting a section of the school’s brick building, as well as their electronic sign. This resulted in thousands of dollars of damaged property. The messages left were very vulgar and pushed tensions between students of the two schools even further.

WJ’s boy’s basketball team, accompanied by an army of students, made the trip to B-CC for their highly anticipated contest against the Barons. The game itself was thrilling, with the Barons edging out a one-point victory. The aftermath, however, was a chaotic mess that saw countless injuries and three B-CC students arrested on assault charges. The principals of both schools released a joint statement regarding the student arrests and vandalization of school property, labeling the occurrences as “unacceptable” and stressing that similar behavior would not be tolerated in the future.

WJ Principal Jennifer Baker moved the WJ vs. B-CC basketball game start time from 7:30 p.m. to 3:30 p.m. and imposed limitations on crowd behavior in an effort to prevent the fan violence that occurred at the previous basketball game. The restrictions in place included no heckling of any kind, no inappropriate language, no masks, no storming the court and no noisemakers. Walter Johnson administration also held WJ students in the gym until the entire B-CC section had cleared.