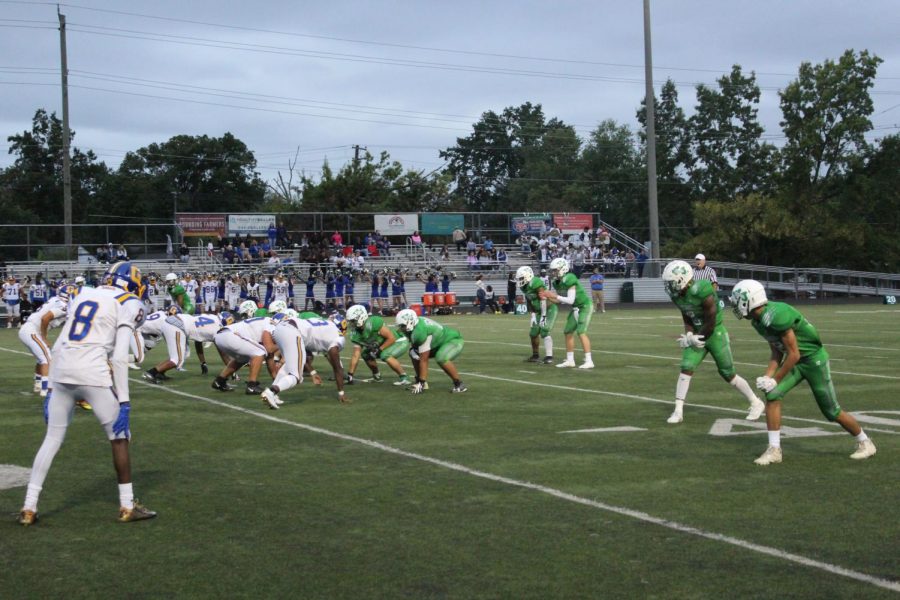 Senior quarterback Josh Forburger is ready to take the snap against Gaithersburg defense.

Three weeks into the 2019-2020 season, the WJ football team has already nearly matched their win total from last year. The Wildcats have been tearing it up on offense and defense, putting up a total of 117 points through three games while also limiting opponents to under 10 points in two of the three contests.
Senior quarterback Josh Forburger and junior running backs Ian Griffin and Aaron Jones have been at the forefront of the offensive charge. Forburger has accounted for eight total touchdowns (five passing and three rushing), and his 669 yards through the air sits him atop the county in passing yards. Griffin has racked up 16 receptions for 265 yards, good enough for second most receiving yards in the county, while Jones’ 319 rushing yards place him at fourth in the county. Griffin and Jones have combined for 10 touchdowns thus far, eight and two respectively.

Offensive dominance has not been the only factor in the Wildcats’ early success. Senior transfer Kai Holloway has made his presence felt defensively with two interceptions in two games. In his first quarter of play as a Wildcat, Holloway intercepted a Gaithersburg pass near the 30-yard line, but it was called back due to a penalty on the play. Within the next few drives, however, Holloway pulled off a stellar one-handed interception in the redzone before nearly returning it for a touchdown. He didn’t stop there. On a deep pass play during the second quarter that looked to be an incompletion, Griffin batted the pass into Holloway’s arms for his second interception of the game. Holloway has also eased his way into the offensive scheme becoming a common target for Forburger. Although he is yet to reach the endzone, he hopes to in their next game against a BCC Barons defense who have allowed 38 points per game from opposing offenses this season.

“I’m just trying to play football and I’m expecting a big year out of the Wildcats,” Holloway said.

The team has welcomed Holloway with open arms and the coaching staff has made the transition a bit easier for the newcomer.

“Coach Hurd has been very welcoming, he’s definitely made me feel like I’m part of the team just like everybody else. To be honest, I don’t even feel like that much of a new kid,” Holloway said.

High praise for the second year head coach and his staff is not uncommon amongst the players.

“The coaching staff keeps us level headed week to week making sure we focus on going 1-0 that week. They make sure we know that what happened a week or two before is behind us and the upcoming Friday is all that matters,” Forburger said.
A winning culture is being founded here at Walter Johnson, which is something that has not happened in a long time. The Wildcats have posted a +72 point differential in their first three games and look to continue their winning streak in their week four matchup against BCC tonight. Leadership instructs students to wear black, and come out to the tailgate that begins at 5:30 p.m. in the back circle before the game kicks off at 7 p.m.