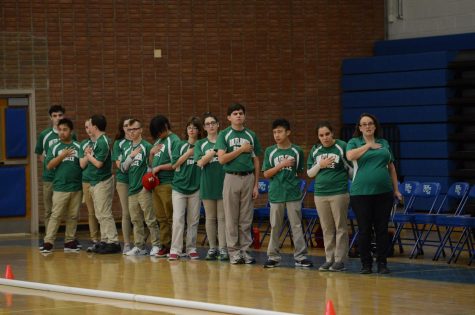 The Bocce team says the pledge before the game against Churchill. Image Courtesy of Lifetouch

This season of bocce has been full of teamwork, motivation and improvement. Bocce is a corollary sport, which means that around 75% of their athletes are a part of the LFI ( Learning for Independence) Program.

Bocce has lost every game so far, but they are continuously working on aim and boosting eachother up. In the games against Churchill and Whitman, WJ came very close to winning a set each, but it wasn’t enough. They kept their heads high and continued to work on new strategies, and in their fourth game against BCC,  the team got to the third frame, which is their biggest success so far this season. They did not win, but their practice is definitely starting to pay off.

Coach Emilia O’Connor has been coaching bocce for many years now.

“My goal is always to play the best games we can, [and] use what we learn about technique and strategy in practice to play to our strengths,” O’Connor said. “All the games so far have gone really well, we have not won, but we have been playing good games. What I love about this team is how much they support each other and really try to give it their all!”

Bocce players have held their heads high throughout the tough season. Co-coach Christine McArdle has also been a bocce coaching pro. She has stepped in while O’Connor is on maternity leave. She notes that the team has been working on improving accuracy, consistency and encouragement.

“It has been a lot of togetherness, [and]getting to know each other,” McArdle said. “Team building is always very important, you have to instill the skills before you get the results so were skill building at this point.”

“I think bocce overall is just a really fun experience filled with so many amazing people,” Kelberg said. “I feel like I could improve on my aim and control on the ball, but I’m just having a lot of fun.”