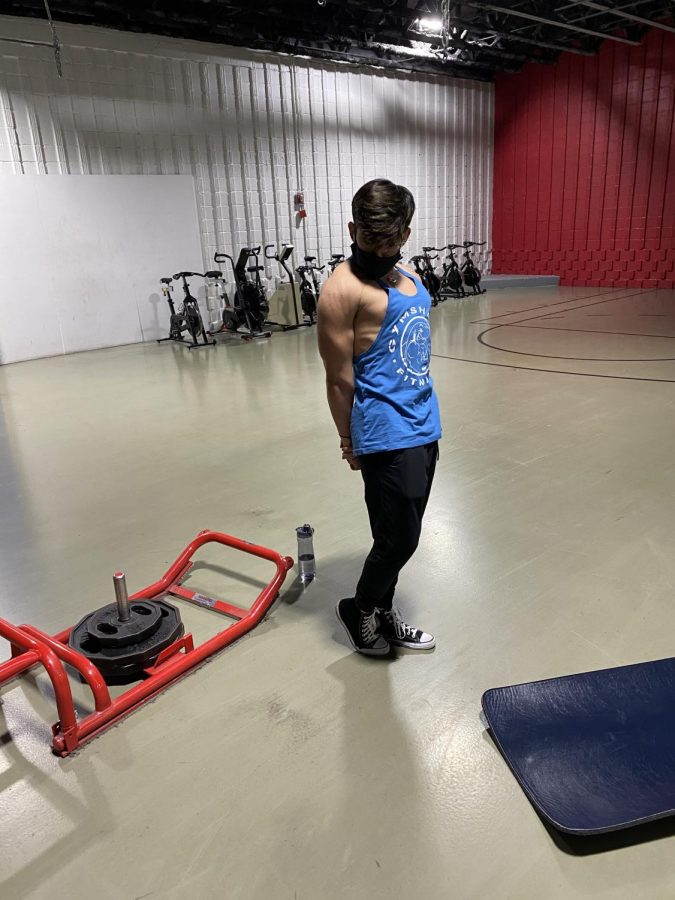 Ayuni poses in front of the camera after his workout at his local gym.

The COVID-19 pandemic has disrupted sports seasons across the country. Montgomery County Public Schools has been one of many districts that have either suspended or cancelled all sports. Fortunately for students like senior Ayuni Fox, the county has allowed gyms to stay open with strict COVID measures in place. Fox is an aspiring body builder who has hopes of eventually competing on a global stage.

Fox points to multiple things that have inspired him to pursue his dream of being a bodybuilder. He cites motivational speaker David Goggins as one source. Goggins used to be an overweight and unmotivated teen. He then joined the military where he learned discipline, and developed a certain mental strength. Goggins has become famous for challenging himself in ultra marathons and motivating young teens like Fox. Like Goggins, Fox looks within himself to draw inspiration.

“My inspiration is myself to see myself improve,” Fox said.

Fox is not only motivated by the potential competition, but he is also motivated to improve his mentality and his health.

Bodybuilding is not an easy task. There are severe risks to lifting heavy weights frequently. One bad squat or deadlift can result in career altering back injuries and torn muscles. It takes a certain amount of grit and mental toughness to be able to lift weights almost every day.

“My workout routine is six days a week of squats, deadlift and bench along with doing accessories for arms, back, chest, legs and abs three times a week,” Fox said.

This rigorous routine at the gym is just half of the process. Fox also has to make sure that he is able to translate his workout into bulk through his diet. To gain muscle, bodybuilders almost have to force themselves to eat meals with high levels of carbohydrates and protein. Fox’s diet consists of a gallon of water, a pre and post workout shake, and three filling meals.

“My goal is to be the greatest natural bodybuilder ever and compete in the USA powerlifting federation,” Fox said.

Fox’s ultimate goal is to enter competition. Not only does he want to compete, he wants to share with others his journey through social media. Fox plans on posting motivational messages and pictures of his progress on his Instagram account. For independent athletes like Fox, COVID-19 has provided an opportunity to focus on their sport with very little distraction.