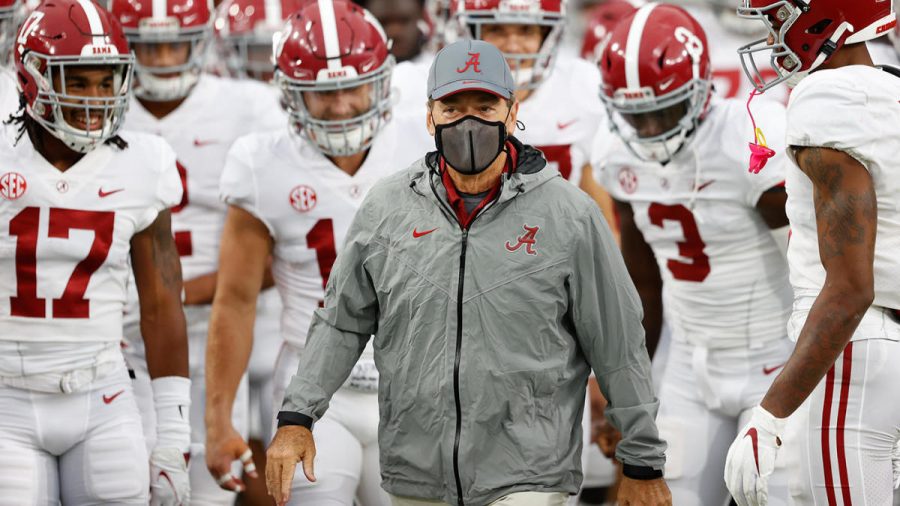 Alabama head coach Nick Saban leads his team onto the field during a pandemic.

With about a month of college football in the books and the Big Ten and Pac-12 on schedule to return soon, many question how safe and responsible it is for college football to return during the COVID-19 pandemic. With games having been postponed or cancelled due to players or staff getting Coronavirus, what is in store for the rest of the season?

Many teams in college football have already had players get infected whether it be in the season or the offseason. Clemson and LSU had plenty of cases before the season started, and teams like Notre Dame and Virginia Tech have had to postpone games this year because of too many positive tests that week. Although no players or staff have been hospitalized yet, if that does occur it could be detrimental to the 2020-21 season.

Even with many players testing positive, star players such as Clemson quarterback Trevor Lawrence and Ohio State quarterback Justin Fields were very vocal about wanting to have the season.

“We feel safe and feel like good protocol is in place. We just had to clear that up. It was in place already, and we just had to find that out. We are risking our health by playing, but we are assuming that risk. We feel like we are in good hands,” Lawrence said during a Zoom media session.

Fields took different measures by creating a petition to get the Big Ten to play that got over 300,000 signatures. Many people argue that these players are safer in an environment where they are making sure that they are following COVID restrictions and getting frequent testing, unlike they would be at home.

“I feel like college football players are just much safer at the team facilities then they are at home or just being regular students in college because they have more pressure to stay safe. I also think it’s worth playing due to all the money they make and can put into other parts of the school,” senior Chris Reilly said.

Some are concerned with the crowds at the games as more and more teams are allowing more fans at the games. SEC and Big 12 teams seem to have a lot of people in the stands that aren’t social distancing or wearing masks.

“I feel like the amount of people in the crowds is very concerning, especially with many not social distancing or wearing masks,” Reilly said.

With the pandemic still being very bad throughout the United States, and throughout the world, many believe it’s irresponsible for college football to allow this many fans at the games.

“I was watching the Red River game last weekend (The University of Texas and University of Oklahoma game) and my mom didn’t believe me that it was live. There were so many people at the game she thought it was a rerun,” senior Jacob Dincin said.

With COVID-19 still having very high numbers, the rest of the college football season could be very vital on whether or not college basketball or other college sports play.