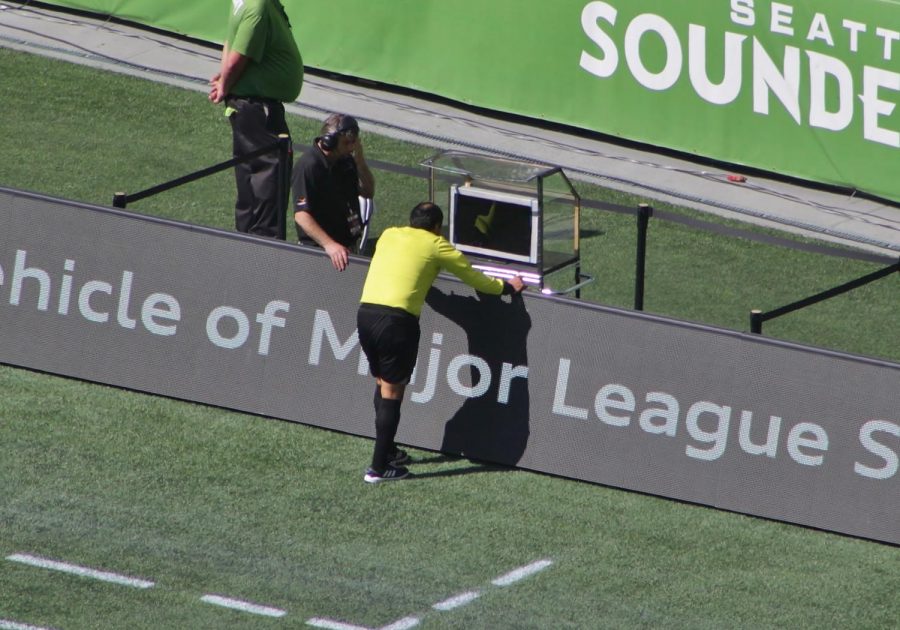 VAR is used in leagues all around the world. The system has been under much scrutiny due the continuation of inconsistent and bad calls.

As soccer, or as most call it “football” in Europe, begins to get back in swing, VAR, the nemesis of the game, is at large again.

The main problems with VAR are the inconsistencies and the new reliance on this technology to make calls for the referees. Often, we will see referees hesitate to make calls in anticipation that the people in their earpiece will make the call for them. A greater dependence on VAR will lead to more missed calls, angrier fans, and more nitpicking of these games, which no one wants to happen. Watching soccer is supposed to be an enjoyable experience, a time to root for your hometown or favorite team and celebrate when they hopefully win; however, VAR makes these games about what call by the ref was the worst, and it is essentially a positive feedback loop for more hate towards referees and the game.
“VAR breaks up the flow of the game, and if we had VAR in the past, so many great moments would be taken away and so much inspiration for many young players would be lost too,” senior Diego Orellana said.

Just last week, Fulham coach Scott Parker complained to interviewers about the horrible calls that the VAR system was making, and how it cost them the win, multiple times. The whole flow of the game was ruined, and if VAR was around in the past, some of the games greatest moments never would have happened. Take the late Diego Maradona’s famous “hand of god” goal for example. What made it so notorious and popular was that in reality, Maradona did not head the ball in, but punched it in with his hand, making the player very much disliked or respected depending on who you ask. With VAR, great moments in the game like these never would have happened, and the game would be worse because of it.

Another flaw with the system is how it disrupts the general flow of the game. Soccer is meant to be free flowing, and each team can take many different routes to win. A team like Barcelona will usually play with a possession based “tiki-taka” strategy , always moving the ball, passing it to one another until a gap opens in the opponent’s defense and a goal can be scored. VAR poses a direct threat to the flow of the game, with stoppages almost every time the ball goes out of bounds to check if there has been a possible handball, offside or some other random foul that has little no effect on the game.

Improvements need to be made, and in the span of a year, I can confidently say that nothing has changed. In a way it has gotten worse, not because calls have become more egregious, but just the fact that VAR is still being used is a major problem and roadblock to the game. Firstly, calls need to become more consistent. In a game where Arsenal played West Ham, twice players on Arsenal choked or attacked players on West Ham. Although both of these were flagrant offenses, only one was sent off, which is very confusing to not only fans, but TV pundits, as well. Point is, if a call is going to be made, the calls must be consistent across the board.

VAR also needs to become more lenient. Instances such as a game earlier in the season, where Brighton and Hove Albion faced off against Manchester United, the final whistle was blown, but a penalty was still awarded for a handball. In the end, Manchester United won off of that penalty, 12 minutes into extra injury. It is also completely ridiculous how some of the offside calls are made. In no reasonable world should an offside call be made for someone’s hand or toe a centimeter past the defenders leg. Though the referees need to stick to the rulebook, it seems like the calls are getting way too technical. The VAR system is here to assist referees, and if the referees can not see a call in real life because of how minor it is, the call should not be made.

I don’t see the VAR system ever improving unless a major push is made to change the system. And, if improvements aren’t made, a viable option is to just get rid of it all together. In the end, I don’t think anyone would complain if the refereeing actually went back to the real referees.