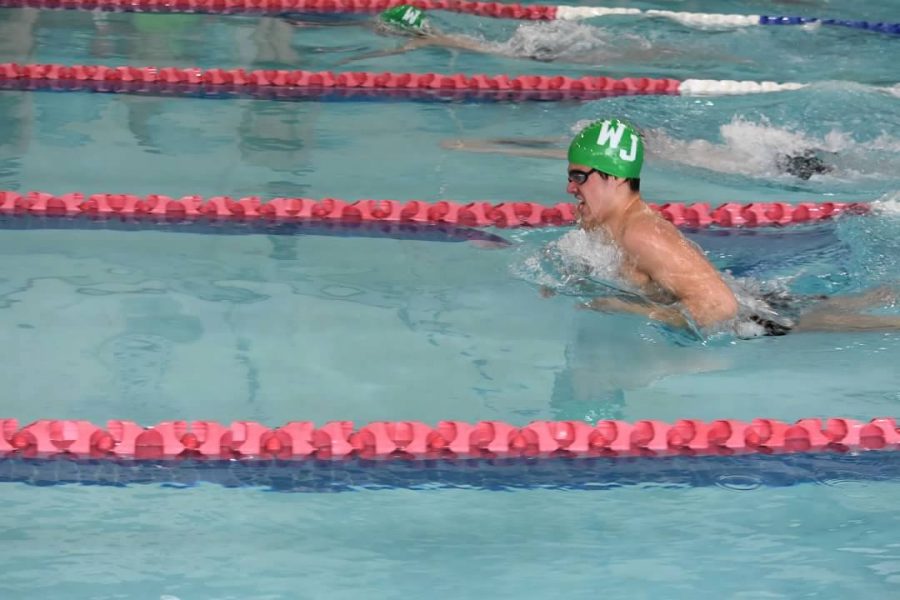 Senior Henry Bagshaw finishes his last lap at a Montgomery County swim meet. An impressive and decorated high school career for Bagshaw is coming to an end.

As senior Henry Bagshaw’s WJ swimming career nears the end, his accomplishments in the water as both an individual swimmer and a part of team relays will be remembered. The continuous early morning routines that Bagshaw has experienced since the beginning of his swimming career have shaped him into the hardworking, motivated person he is today.
Before his time swimming in high school, Bagshaw was originally introduced to the sport through family ties. Both of his parents swam competitively at division one schools. His dad, who he mainly looked up to, swam at Villanova. After realizing that swimming was something he could be good at and with much encouragement from his parents, Bagshaw began his journey for club team RMSC, (Rockville Montgomery Swim Club).
“In elementary school I would always swim for fun, but I wanted to start seeing how I matched up against other swimmers, so I joined RMSC,” Bagshaw said.
As opposed to high school swimming, club swimming was more individualized and helped prepare Bagshaw for both individual and team relay races at WJ.
“At WJ, the team is definitely more fun and spirited as compared to swimming for RMSC, but club swimming helped my endurance and I was able to find my best strokes early on through constant practice,” Bagshaw said.
Waking up at 4:45 in the morning, swimming for a couple hours, heading to school and practicing again later that day was a routine that Bagshaw started early on, and continued during high school. As grueling as it sounds, this routine helped motivate Bagshaw not only in the water, but in his everyday life.
“It definitely was tough waking up that early and knowing I had to go to school shortly after, but this eventually helped with my motivation in school. I felt more productive throughout my day after early morning practices,” Bagshaw said.
Bagshaw’s most impressive accomplishment as a member of WJ swim and dive was contributing to the Maryland state record for the 200 meter freestyle relay. Although many of his individual times stand out, setting a record with his teammates was what made this achievement so memorable for Bagshaw.
“It was a special feeling knowing that I was a part of such a great relay team, and setting the record was surreal. Everyone on swim and dive throughout my years at WJ have been super encouraging and enthusiastic during practices and meets, which makes the experience for swimming at my school so much better,” Bagshaw said.
As for what comes next, Bagshaw doesn’t plan on swimming in college but will keep his options open for joining a club team.
“My time swimming for RMSC and WJ has been unforgettable. Even though this year’s season wasn’t how I imagined it would be, I feel as if my hard work has paid off. I’m glad to have spent my swimming years with great teammates and coaches that have helped prepare me for my next steps,” Bagshaw said.